Get 2 limited-edition podcast mugs when you make a sustaining gift of $8 or more per month today!
Arts & Culture

Saint-Gaudens at The Currier

The Currier Museum of Art in Manchester is presenting the work of American sculptor Augustus Saint-Gaudens in an exhibit that runs through May 20th.  Saint-Gaudens was the most important American sculptor of the late 19th and early 20th century, and this is the first major museum exhibit of his work in New England in more than 30 years.

A collaboration between the Currier and the Saint-Gaudens National Historic Site, the exhibit includes full scale versions of three of his most famous works: Abraham Lincoln: The Man, the Adams Memorial, and Diana.  Andrew Spahr, Currier Museum Curator, began discussions with Henry Duffy, Saint-Gaudens National Historic Site Curator, over 10 years ago.

Spahr and Duffy aimed to bring the sculptor’s work to a larger audience, but also wanted to provide an opportunity to interpret Saint-Gaudens' work in a museum setting.

The exhibit is presented in four galleries.  The first gallery contains objects that help to tell the story of Saint-Gaudens' life, including cameos he carved as an apprentice at age 13, as well as personal letters.  Other work in the first gallery provides a context for Saint-Gaudens work in the national art scene.  Featured are a plaster bust of Admiral Farragut (1876), a reduction of his “standing Lincoln” (1884-1887), as well as busts, drawings and a plaster study for the Shaw Memorial (1884-1897).  Saint-Gaudens monuments to heroes like Farragut and General Sherman defined America’s response to the Civil War.  The Shaw Memorial was the first public sculpture to depict heroic African-American soldiers of the Civil War.

In contrast to the intimate setting of the first gallery, the high-ceiling second gallery contains several full-scale renditions of Saint-Gaudens sculpture, which immediately dwarf the visitor, and clearly illustrate the monumental size of his work.  A plaster bust of President Lincoln, positioned on a high pedestal, gives you a clear sense of the monumental size (12 feet) of the sculpture that was erected in Lincoln Park in Chicago in 1887.  Diana (1893), balanced on one foot while she aims her arrow, seems super-human at six feet tall.  Visitors to the Currier are familiar with the “reduction” of this statue, which is on permanent exhibit in the museum collection.  However, seeing the large-scale version helps the viewer to more fully understand the context for the original sculpture, which was 13-feet in height, and could be seen throughout Manhattan from her illuminated perch atop the original Madison Square Garden.

The third gallery is dedicated to a single sculpture, the Adams Memorial, which resides in Rock Creek Cemetery in Washington, D.C.  Often called “Grief,” it depicts a shrouded figure depicted against a granite block, and was commissioned by Henry Adams as a memorial for his wife, Clover, who died tragically.  The walls of the gallery have been painted deep, marine blue, and the visitor is drawn into a contemplative space.  A quote by John Hay, a family friend (and New Hampshire resident) sets the tone for the interpretation of the piece: “It is full of poetry and suggestion of infinite wisdom, a past without a beginning and a future without end, a repose after limitless experience, a peace to which nothing matters.  All are embodied in this austere and beautiful face and form.”

The final gallery contains many pieces from the Currier’s permanent collection, representing other artists who lived in the Cornish Colony that Saint-Gaudens founded.  Again, Currier visitors may be familiar with the works of William Zorach, Maxfield Parrish and Willard Metcalf, but after touring the full exhibit, one can more fully understand the gravitational pull that brought other artists to New Hampshire to live and work in the aura of Saint-Gaudens. 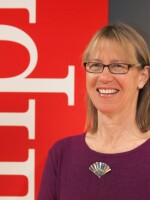