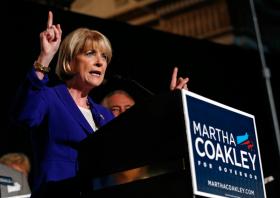 Supporters roared in the gilded ballroom of the Fairmont Copley Plaza as Coakley took the stage to deliver her acceptance speech.

"Tonight, you have sent a powerful message,” Coakley said to the crowd. “The insiders, the big money Super PACs wont be deciding this election. It will be decided by fair, hardworking men, women and children who just want a fair shot.”

Coakley sounded populist themes in her acceptance speech and she previewed the next 56 days of attacks on Charlie Baker, a former health insurance executive and two-time candidate for governor.

"Charlie Baker believes voters won't remember he ran as a Tea-Party conservative in 2010, railing against what he called the bathroom bill and putting Gov. Patrick's face on EBT cards as a political stunt," Coakley said. "Voters are smart enough to see through Charlie's superficial transformation."

Coakley’s victory was not unexpected: Polls predicted she would win by anywhere from 12 to 20 percentage points. Instead, she won by only six.

This relatively slim margin might worry some Democratic voters who are still smarting from Coakley’s devastating loss to Scott Brown in the special election for U.S. Senate in 2010. But this past year, Coakley has tried to shed her earlier image as aloof and overconfident.

“I said when we started this campaign that no one would work harder, knock on more doors, make more calls, and shake more hands than we would, and thats exactly what we did,” Coakley said. "We ran, we fought and we stood for something that matters.”

Down the street, state Treasurer Steve Grossman addressed his supporters at the Park Plaza Hotel. He said his campaign came close, but that he had called Coakley to congratulate her.

And Don Berwick, who ran to the left of Grossman and Coakley for the democratic nomination, thanked his supporters for their work and sacrifice. In a statement, the former federal healthcare administrator said that they united around a mission to make the commonwealth a better place. And that mission continues.

Berwick and Grossman will attend a unity breakfast Wednesday morning to pledge their support to Coakley, but how long will it take for their foot soldiers to do the same? Coakley, no doubt, is hoping it's before the November 4 general election

Warren Disavows PAC Urging Her To Run For President

U.S. Sen. Elizabeth Warren has written to federal regulators stating that she has nothing to do with a newly formed political organization urging her to run for president in 2016.

Lawyers for the first-term Massachusetts Democrat, who was elected in 2012, delivered a letter to the Federal Elections Commission on Friday stating that Warren "has not, and does not, explicitly or implicitly, authorize, endorse, or otherwise approve" of any activities by "Ready For Warren."

Bay State Gambling Debate: What It Means For N.H.

We're checking in with the ongoing debate over casino projects in Massachusetts and the referendum coming this November on whether to repeal the three-year-old law. We'll also look into how the gambling debate in Massachusetts might impact New Hampshire.