The NHPR Officially Unofficial Review of 'Single All The Way'

If you’re searching for a cute holiday movie with a predictable plot, you’ve found it in Single All The Way. And lucky for us, it’s set in Bridgewater, New Hampshire.

In Netflix’s Christmas movie, Peter (Michael Urie), a social media manager in Los Angeles, convinces his best friend and roommate Nick (Philemon Chambers) to pretend to be his boyfriend during his trip home to Bridgewater for Christmas. But Peter’s plan is thwarted when his mom arranges a blind date with a local spinning/skiing instructor, despite the rest of his family thinking Peter and Nick belong together. For those familiar with holiday romantic comedies, you know what happens next.

Sadly for us, it seems as if Single All The Way’s New Hampshire is more about providing a generic small-town contrast to Peter’s social media literate life in Los Angeles than capturing the 603. I mean, how many small New Hampshire towns with a population of just over 1,000 have a spin studio?

Granite Staters will immediately know that we aren’t in New Hampshire anymore (filming took place over the border in Quebec). The movie’s creators bet on viewers not knowing much about the state except that it snows and it’s near Boston. We haven’t forgotten the Massachusetts license plate, though we did note the successful trip to what we think was a New Hampshire Liquor and Wine Outlet.

And I am convinced that this movie was sponsored by TaskRabbit. Not only is Nick a TaskRabbit-er(?) by day and children’s book author by night, but manages to bring up the name of the company in nearly every scene. His work for the freelance handyman app plays a pivotal role in some of the movie’s plot twists, which feels both serendipitous and...filled with excuses for the documented labor abuses enabled by the “gig” economy.

We asked our audience what they thought of the movie, and newsletter reader Molly Rossignol noted that while the mountainous backdrop felt like New Hampshire, the bright downtown scenes and lack of bitter cold did not. NHPR contributor Dave Anderson took issue with how the movie made fun of the Granite State, contrasting its residents with “more urbane characters who visit a backwards (yet scenic) N.H. for Christmas.”

If you’re looking for a spicy, out-of-the-box holiday romance (like another Netflix offering this season, Love Hard), this is not it. A few “I need wine”-style jokes are all that separates Single All The Way from the most wholesome of Hallmark Christmas movies.

The romances between the main characters are sweet, and there’s little conflict, even when one of the characters is rejected romantically by another. A twinkly Christmas town and a cozy yet kooky family provide a familiar backdrop to a story that is guaranteed a happy ending. And sometimes, that's all you need.

Plus, you’ll likely recognize some of the actors cast as Peter’s family members, including Jennifer Robertson of Schitt’s Creek and Jennifer Coolidge, of all of your 2000’s film favorites.

While my hopes for some 603-specific holiday content were dashed (your reviewer did not notice a single white man in shorts in the winter), Single All The Way is peak Netflix comfort viewing. But despite what filmmakers suggest, it definitely doesn’t take place in New Hampshire.

And anyway: There’s no such thing as a “New Hampshire 10."

This feature contains music from "Jingle Bells" by scottholmesmusic.com 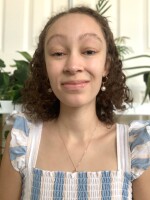