Get 2 limited-edition podcast mugs when you make a sustaining gift of $8 or more per month today!
NHPR Blogs
From The Archives
0000017a-15d9-d736-a57f-17ff8ca00001NHPR began broadcasting in 1981, and in the intervening years has documented the the stories of New Hampshire. From policy makers in Concord, to residents around the state affected by those policies; from notable Granite Staters, to our ordinary neighbors with a good story, NHPR has produced compelling radio for New Hampshire, by New Hampshire. These stories are the components of the NHPR archives, and on this blog we'll dust off some old stories that are newly relevant, and even find some that were never broadcast. We hope to demonstrate how we've changed as a state by charting our narrative on a longer scale.

From The Archives: Arlo Guthrie

Alice’s Restaurant was published nearly 30 years ago, the iconic song that gave the album its name is about the goings on at a restaurant owned by Alice and Ray Brock. Around the corner from the restaurant was the Old Trinity Church, which they made into their home. Ten years ago, Kate McNally, host of NHPR’s Folk Show on Sunday nights, spoke with Arlo Guthrie at the Old Trinity Church in Great Barrington, Ma, now site of the Guthrie Center. This week we’ll listen back to her interview with the folk music icon.

Interviews like this may be the closest thing we get to an autobiography, when Guthrie was approached by a publisher to put his life in writing, Guthrie replied, “I’d love to, but I’m just waiting for a good ending.” Guthrie winds yarns on all sorts of topics over the course of his talk with McNally, including how the Old Trinity Church became the headquarters for the Guthrie Center, and what work the foundation does. He reflects on the larger Guthrie legacy and how he and other members of the family have fared living in that shadow, “when you’re born into a particular briar patch, you deal with it with your own abilities and your own skills and talents.”

Guthrie also touches on how the music industry has changed over the decades, “the days are gone when the record company would invest in anyone, so you might as well do it yourself.” And he relishes some of the unintended benefits of the new business model, which brings fans closer not only to artists but to each other creating a community.

And clearly playing with other musicians is important to Guthrie, as is the folk tradition of political activism, “the hearts of people that are unafraid to stand up and say what they think, to me is the most important responsibility that we have.” 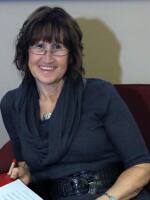