Get 2 limited-edition podcast mugs when you make a sustaining gift of $8 or more per month today!
NH News
Give Back NH

Give Back New Hampshire is a bi-weekly segment that spotlights New Hampshire nonprofit organizations. It airs every other Saturday at 9:35 during Weekend Edition.

The following audio postcard takes us to an Open Studios event hosted by the museum, highlighting the work of local artists: Vicki Blanchard, and Sherry Gould, and Kenny Novak.

My name is Andy Bullock, and I'm the executive director of Mt. Kearsarge Indian Museum, located in Warner, New Hampshire. We're doing a new event today. This is the open doors program and it's kind of a community event where several of the businesses and museums in Warner and Contoocook have kind of invited local artists to come to their different venues to celebrate local art. And so today we have three different artists that we've invited to our museum.

I'm Vicki Blanchard and I'm a member of the Nulhegan Band of Coosuck Abenaki, a tribe here in N’dakinna, which is our homeland, and my medium is pottery.

Hi, my name is Sherry Gould. I'm also a Nulhegan Band member. I live here in Warner and same thing our homeland is N’dakinna and my medium is basket making.

My name's Lenny Novak. I'm Algonquian Abenaki and my medium is antler dreamcatchers.

Sherry: Having the museum as a partner has been really wonderful. So it was kind of natural to just come on up with our arts and share them with the public and do whatever we can to help the museum because they're very worthy of all the honor we can give them because they've been wonderful partners to all of us.

Vicki: One of the great things about the museum for me personally is there's a piece of pottery in here called the Canterbury pot, which is my inspiration pot for the work that I'm doing now, which is digging local clay and recreating pots as my ancestors would have made them and then firing them in a fire pit. So just being here and being near that part is just very special to me.

Lenny: It's always an honor to be here to show our work. But it's a hidden gem in New Hampshire, and it would be nice if more people knew about it because it is an amazing collection of work.

We were kind of erased for so long, and now we're finally at a point where – we're not reappearing because we never disappeared – but where we're visible.

Andy Bullock: We also have an arboretum of about five acres so people can actually come see an ash tree growing and then come into the museum, see how an ash log would be prepared into splints to make a basket and then see some lovely ash baskets. Then, even have further conversations where then we can talk about invasive species like emerald ash borer beetles and how all of those things are degrading the environment and things that we really need to do to rectify the path that we're heading in.

Many people think of November as Indian Awareness Month, and we're certainly thrilled that there's interest in that. But we also want to caution people that native people live here in New England and among us 365 days a year.

HOW TO GET INVOLVED: Enjoy the benefits of museum membership by signing up here. Keep an eye out for the next iteration of the "Adopt an Artifact" campaign, which allows visitors to sponsor an item from the museum collection to help offset the financial impact of covid-19. 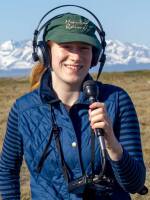 Karen Trop
Karen joined NHPR as its Operations Manager in 2021. Karen most recently worked as Program Director of KNOM Radio Mission, a community radio station based in Nome, Alaska. Previously, she has also worked as a program assistant, deejay and radio producer. During her time at KNOM, she won the Alaska Broadcaster’s Association award for the best COVID-19 response, as well as awards from the Alaska Press Club for feature and arts reporting.
See stories by Karen Trop
Latest Stories