The Center for Cartoon Studies and illustrator Harry Bliss are inviting a new generation of cartoonists to apply for a fellowship at Bliss's house. The well-known illustrator lives in the former home of a well-known author: J.D. Salinger.

Down a gravel road, a few minutes' drive from the hard top, stands an unpretentious brown house, flanked by flower gardens. Only the occasional chirping of birds interrupts the rustle of nearby birch trees swaying in the mid-summer breeze.

When J.D. Salinger – the author of Catcher in the Rye – lived here, not many journalists were invited over. The tucked-away house is famous for being Salinger's refuge after his rise to fame.

Now, it is home to a new generation of artists.

Harry Bliss opened the front door wearing a "Gore Vidal for Congress" T-shirt. He’s lived in the house for about a year.

If you've picked up a copy of The New Yorker Magazine in the past few years, you have probably seen Bliss' illustrations. His latest cartoon is about to be published. It's inspired by life in the Upper Valley.

“It was completely inspired by living out here,” he explained. He went on describing his drawing: “It has man and a woman, and they are out on a picnic, lush trees, very beautiful landscape – not unlike the landscape that we're looking at — and she's on the ground, and the picnic basket's there, and he leans down to take her hand and he says something like ‘take my hand my love, come with me, back to the cabin where we can explore our naked bodies for ticks.'" 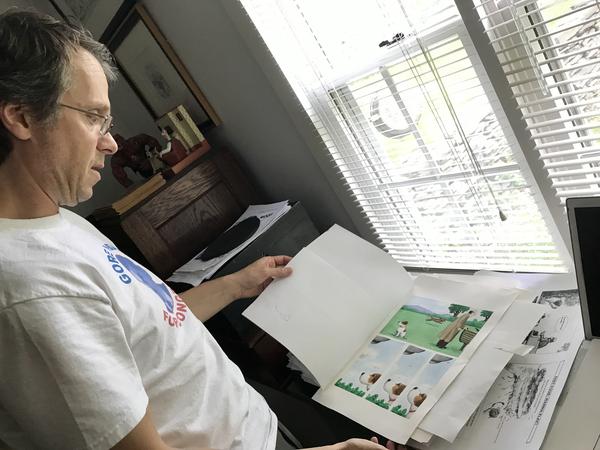 Inside, the house feels small and unassuming. The kitchen has the red laminate countertops of an average mid-century suburban home.

But there's more: The house is filled with staircases leading to unexpected rooms, that smell of seasoned wood, and hidden crawl spaces.

The place is as much an art gallery of work Bliss has collected as it is his home. On every wall hangs ink etches, original illustrations, paintings.

Bliss rattled off a few:  “You have stuff by Walt Kelly –the great Walt Kelly, there's things by Milton Caniff, who did Terry and the Pirates, George McManus who did Bringing Up Father, that's an original Will Eisner, considered one of the godfathers of sequential comics,” Bliss said, and the list went on.

Bliss isn't looking to keep all of this art to himself. He is opening his home to burgeoning cartoonists around the country to apply for a month-long fellowship called The Cornish CCS Residency Fellowship.

They’ll be invited to live and work above the house's garage – rumored to be J.D. Salinger's workspace – to delve head-first into their own cartooning.

Standing in his yard, Bliss calls himself a caretaker – of the house that fostered artists before and the artists of the future.

“You know I like looking after things and preserving them,” he said standing, arms akimbo in his front yard, touring some of his recent landscaping. "That's just what I like to do, that's who I am."

“The idea of nurturing new talent,” Bliss said, pausing. “I want to rid the world of [bad] art – I really do. I want to be part of somehow making the world better through fantastic graphic novels.”

But Bliss says this fellowship is about producing new art, not reflecting on Salinger's work.

“I'm sharing this because I love art and I love cartooning and I love comics so I want to use this space to push comics further; that's my mission, that's all I want” he said. “If it veers off from that... I'm not going to do it anymore, I'll just stay here and work on my own." he said. "But if I can do that, and push comics in to that place, that would be great” he said, grabbing another book of art off a shelf.

Applications are open through Aug. 15 and the winning cartoonist will be notified in September.

That Salinger lived in Cornish is well known.  Less well known is that Salinger had two homes in Cornish.  The first house he lived in for 14 years sits on the hill behind the second.  It recently came on the market and I went to talk to its owner about her home - and about her long time neighbor, J.D. Salinger.

A former home of "The Catcher in the Rye" author J.D. Salinger is up for sale in New Hampshire with an asking price of $679,000.

The Valley News reports the author bought the home in Cornish in the 1950s and later left after separating from his first wife. He remained in Cornish, where he died in 2010 at age 91.

The current owner bought the 2,900-square-foot home on 12 acres in the 1980s. The land once belonged to architect Augustus Saint-Gaudens, and a descendant of his built the house in 1939.

9.17.14: Are Historic Homes Worth Preserving & A Craftsman's Legacy

New England tourism is built on fall foliage, winter skiing, and American history – for example, there are two New Hampshire house museums dedicated to President Franklin Pierce. But with low attendance and outmoded practices, are historic house museums really worth preserving? And, the host of a new TV show about craftsmanship talks about why handmade objects endure.

Listen to the full show and Read more for individual segments.