Dartmouth lore has it that if you get tenure at the Ivy League college, you can expect a call on Thursday evening after the tenure committee meets.

Aimee Bahng, an assistant professor of English, did not get the call until Friday morning.

“I got a call and it was Dean of Faculty Mike Mastanduno,” Bahng said in a recent interview in her scholar study above the Baker Library on the Dartmouth campus. “He said, 'Aimee, I'm very sorry. I have some disappointing news.'”

She was shocked to find that after seven years at Dartmouth, she had not received tenure.

The decision led to a national movement that's carried the issue far beyond Dartmouth. People have written letters and spoken out on Twitter.

A group of University of Southern California students even wrote the hashtag #fight4facultyofcolor on their caps at this year's graduation. 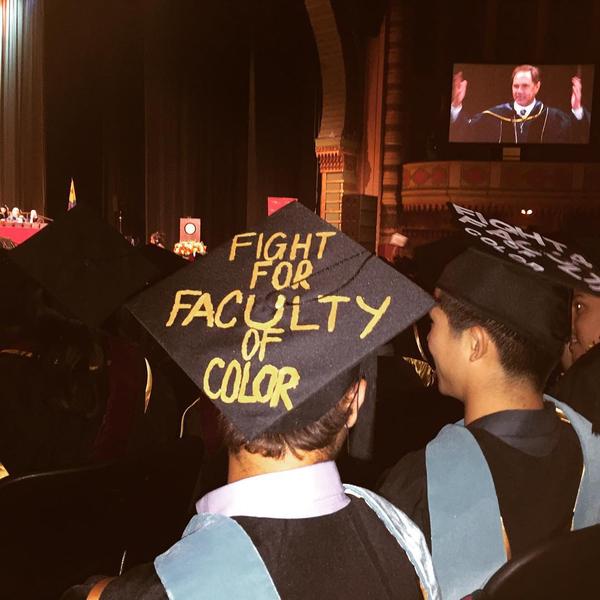 Bahng thinks the outrage reflects a time of disillusionment at Dartmouth that resonates across the country.

“I am one of the few remaining people that is devoted to mentoring students of color, building programs that help this institution have a critical conversation about race and inequality,” she said.

Last winter, Bahng was one of 21 professors at Dartmouth who taught the course “Black Lives Matter.”

Bahng volunteered extra time to build the interdisciplinary class, which facilitated conversations about race violence and inequality after the 2014 riots in Ferguson, Missouri.

“I am the last standing Asian-American from a student and faculty push to get Asian-American studies here, and I think there's a recognition that we're at a breaking point,” she said.

For the 2014-2015 year, the most recent public data available, the total number of tenured faculty of color at Dartmouth College was 14.2 percent. According to a statement from Dartmouth, the number is now closer to 16 percent. The definition is broad and it includes: Hispanic/Latino, American Indian or Alaska Native, Asian, Black or African American, Native Hawaiian or other Pacific Islander.

Nationwide, 21 percent of tenured faculty are of color.

When her peers found out Professor Bahng did not get tenure, letters flew in from all over the country — from Stanford to MIT — advocating for Bahng and for keeping ethnic studies alive at Dartmouth.

Tufts Professor Lisa Lowe wrote one of these letters and says the issue is bigger than Aimee Bahng.

“People are concerned about how difficult it is to establish Asian American studies and the study of race, ethnicity, immigration and Diaspora generally at Dartmouth,” she told VPR.

Lowe has taught in the California University system, as well as at Yale and Tufts. She says the West Coast has fostered robust curricula for race and ethnic studies since the 1970s. But “on the East Coast, it's still emerging, it's not as established in various universities and that's part of the challenge Dartmouth is facing,” she said.

On a recent sunny Friday afternoon, on the Dartmouth green, as students toss Frisbees nearby, Melissa Padilla says faculty of color have helped her deal with racism from professors and students. Padilla was born in Mexico and raised in Georgia.

“When I talk to these professors who have had those same instances as students in undergrad, they care for me not only as a student, guiding me through all of the procedures, they care about me as a person,” she said. “They can relate to all of the weird things you have to navigate as a student of color of campuses like Dartmouth.”

Bahng thinks being this type of mentor is overlooked in faculty evaluations.

She and others at Dartmouth want to know: “Why isn't there a space there specifically to indicate what you've done to make this campus a more diverse place? If it really is one of the top priorities for the administration, for the college, why isn't it built in to these assessment forms?”

Dartmouth responded in a written statement that many factors go into tenure decisions, including scholarship, teaching and service. The school said it is committed to raising the number of tenured faculty of color to 25 percent by 2020.

Dartmouth tenured one professor of color this year, and the school has allocated funds to hire eight new professors of color in the coming term.

Correction 9:35 a.m. 5/24/16 This story has been corrected to reflect the fact that Aimee Bahng is an assistant professor of English at Dartmouth College, not a professor.

The president of Dartmouth College has condemned reports of aggressive behavior during a Black Lives Matter protest earlier this month.

A crowd of students marched through Baker-Berry Library on Nov. 12, where demonstrators allegedly confronted other students who were studying with racially charged language. The protest occurred after a large demonstration by Dartmouth and Upper Valley residents.

Three Bills Will Address Questions Around Dartmouth's Debt To State

A state lawmaker who questions whether Dartmouth College has sufficiently repaid the state for its generosity more than a century ago is drafting three bills aimed at holding the Ivy League school accountable.

The Legislature gave Dartmouth cash and land in the 1800s with the provision that any resulting income be used to educate poor New Hampshire students.

Dartmouth College is beginning its transition to a new residential model designed to provide students with more continuity when living on campus and greater interaction with faculty beyond the classroom. The move to a residential college system was among the changes President Philip Hanlon announced in January to address problems such as high-risk drinking, sexual assault and a lack of inclusion.