Join as a $13-a-month sustainer and get the retro NHPR t-shirt!
All Things Considered
Environment

Republican Gov. Paul LePage is defending his support of legislation that could make it easier for private businesses to use eminent domain to seize property for natural gas pipeline expansion. The governor says the legislation is necessary to alleviate what he calls the New England energy crisis. But the governor's two opponents oppose the move.

Tom Porter reports on the gubernatorial candidates' differing views on a bill that would allow the expansion of a natural gas pipeline.

At issue is federal legislation known as H.R.1900, The Natural Gas Permitting Reform Act, which aims to streamline the permitting process for the development of natural gas pipeline projects.

Last week, Gov. Paul LePage sent a letter to Maine's two Democratic House representatives, Chellie Pingree and gubernatorial hopeful Mike Michaud. In it, the governor cited the critical situation facing Maine consumers this winter and asked them to reconsider their opposition to the bill.

Speaking to reporters in Gorham Monday afternoon, LePage said a recent decision by Massachusetts Gov. Deval Patrick to back away from new pipeline projects has grave implications for Mainers, and makes the passage of H.R.1900 even more important.

"All we're trying to do is to expedite gas," LePage said. "Natural gas is what we need to do, to expedite it, to make it less expensive for Maine homes. Maine homes pay on average $3,000 through the winter, the rest of the country is $2,000. This year, like last winter, could spike up to $4,000."

Congressman Michaud, meanwhile, says he's not opposed, in principle, to the expansion of natural gas projects. "I believe that natural gas is a good transitional fuel for the state of Maine," Michaud says.

By "transitional fuel," he says he means using natural gas as a stop-gap measure while cleaner, renewable long-term energy sources can be developed. Michaud's opposition to L.R 1900, however, can be summed up in two words: eminent domain.

In response to the governor's request, Michaud sent a letter expressing concern over the potential impact on public safety, private property rights and Maine's environment if H.R. 1900 were to be adopted.

Michaud points out that the proposed measure imposes a 90-day deadline for approval or denial of permits. Failure to act within this time, he says, means the permit is automatically approved. In other words, a pipeline company would automatically be granted the right of eminent domain - the ability to take a private landowner's property.

"And that's why I voted against the legislation," Michaud says. "If you have a huge pipeline that's being developed, 90 days is sometimes not enough to really look at the environmental impact to what would be occuring."

Asked for his view about eminent domain, Gov. LePage had this to say: "I don't like it either, but I don't cut it, I don't stop it, before I try. He voted against it before it even got started. Why don't we start it and see where the problem comes up? And then we try to negotiate our way through it."

LePage's other opponent in the upcoming gubernatorial race - independent Eliot Cutler - also supports increased investment in pipeline capacity to deliver natural gas to Maine and the region. But, like Michaud, he views natural gas as a "transitional fuel," and is no fan of of H.R 1900.

"This is a horrible bill," Cutler says. He says his opposition is due to is the undue level of power it gives the Federal Energy Regulatory Agency - or FERC - in the permitting process. "You don't want to have FERC making decisions for environmental regulating agencies over the terms and conditions of a permit," Cutler says. "Mr. Michaud missed that."

He describes this as most significant flaw in the bill, and the likely reason for its failure to make it very far in Congress. 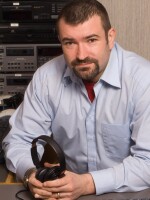 Tom Porter
That very British voice you've begun hearing on Maine Things Considered belongs to our newest reporter, Tom Porter, who comes to us after a prior stint as a reporter at WVTF-FM, a public radio station in Roanoke, Virgina.
See stories by Tom Porter
Latest Stories
Related Content