As New England Ages, Immigrants Make Up A Growing Share Of Health Workers

New England is an old region, and not just by historical standards.

The population here is aging faster than almost any other place in the country. Fewer people are having children, and many of the states struggle to keep younger generations living and working here.

'The Bedrock of the Health Care Industry'

Standing at the front of a classroom, an instructor writes basic medical definitions on a whiteboard. Nine students from all over the world scribble down notes and shout out answers in unison.

Thirty-year-old Ayehu Lakew sits next to classmates from Nepal, the Dominican Republic and Jamaica. They're all here for a class called "Working with Frail Elders" at Boston-based Jewish Vocational Services. It's a nonprofit job-training program focused on specific industries like food service and health care, both sectors facing labor shortages.

With a bright smile spreading across her face, Lakew says, in imperfect English, that after about two months, the course is going well.

"Oh, it's good, I like it," she says. "You know, I don't have experience before, but I want to be, like, nursing in the future. This is good start for me. Before I got my baby I used to work in the parking place."

Lakew was a fashion model in Ethiopia before she arrived in Boston four years ago on a diversity visa. Her baby son was born here and she's hopeful that with this training, she won't need to return to her job as a parking attendant. She laughs and suggests that we check back with her in five years to gauge her progress. 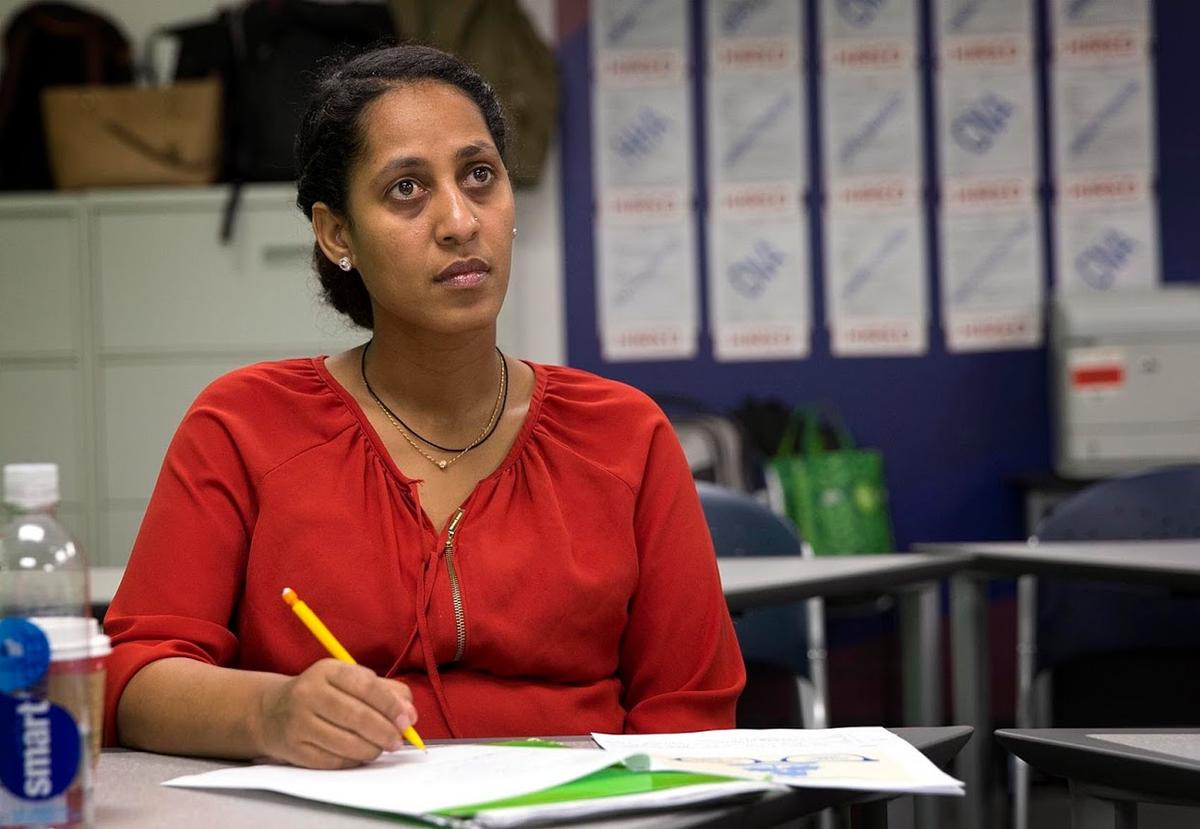 "You can see me, like, after five years, registered nursing," she says. "I'm going to be, like, full time nursing. This is good start to have, good bridge for register nursing."

Jerry Rubin, the president and CEO of Jewish Vocational Services, says students make their way to JVS through different channels.

"Some of our students are coming to us because they're recent arrivals in the country, they may have actually been refugees who've been resettled here, and they're coming to us through a refugee resettlement agency," he says.

Established in 1938 to train recently arrived Jewish immigrants fleeing Europe, Rubin says classrooms are now full of Central Americans, Africans and Europeans, all of whom have legal status in the U.S.

These students, Rubin says, are the changing face of health care workers.

A Demographic Storm, Shielded By Immigrants 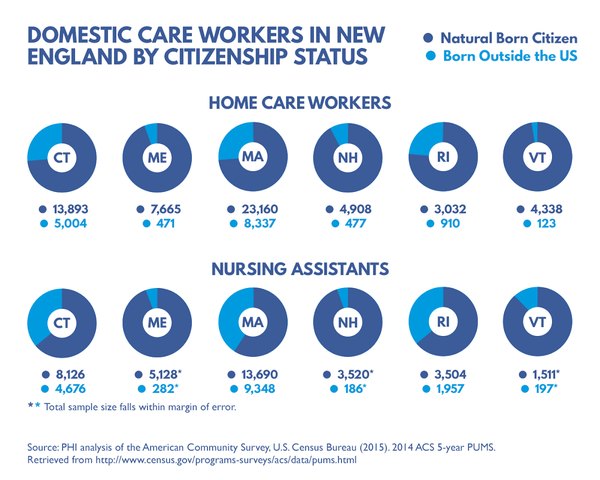 As of 2014, more than a quarter of the home health care workers in Massachusetts were foreign-born, according to census data compiled by the Paraprofessional Healthcare Institute. Forty-one percent of the nursing assistants in the state's assisted living facilities were also born outside of the U.S. And these numbers likely miss immigrants who work part-time or who may be here illegally and working under the radar.

Reliance on immigrant labor for health care is only expected to increase, especially in New England, where there's a demographic storm brewing.

The region is home to some of the oldest, whitest states in the country, and its six states have the six lowest birth rates.

When you take these factors into account, says Kenneth Johnson, senior demographer and professor of sociology at the University of New Hampshire's Carsey School of Public Policy, "it means that the labor force, even in Northern New England, which is extremely non-Hispanic white, is going to have to depend on somebody other than whites if they are to provide a sufficient labor to address many of the needs that are going to come up in the future, particularly with regard to health care."

Johnson co-authored a recent study that found more white people are dying than are being born in one-third of the country's states. That includes all of New England, with the exception of Vermont.

Adding all of this together reveals some unsustainable labor trends.

Barry Bluestone, a professor of public policy at Northeastern University who's run some of the jobs numbers, predicts that in Massachusetts, "we're going to need about 93,000 additional home care workers over the next 10 years, or almost 10,000 a year." 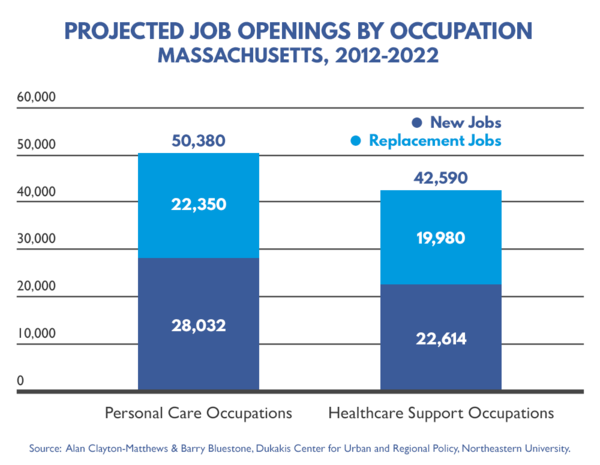 Bluestone says given the population projections for the region -- namely, a shrinking workforce -- New England needs to plan accordingly. And he's concerned that national conversations around immigration could hamper those preparations.

"These are overwhelmingly immigrant workers, and what I fear is if the current kind of political environment either shuts off immigration, or potential immigrants look at the United States and say this is not a very comfortable or safe place to be," Bluestone says. "I don't have any idea how we're going to fill those 10,000 jobs each year."

Over the course of his campaign, President-elect Donald Trump spoke of mass deportations of people in the country illegally, and the need to toughen screening for refugees coming to the U.S.

If put into place, experts say these actions could further strain an industry that already struggles to fill positions.

Dr. Robyn Stone -- who's senior vice president of research at Leading Age, a trade group for nonprofit elder care providers -- says meeting the need for care providers in the future is a labor opportunity for both immigrants and workers born here in the U.S. But, she cautions that the native born workforce is the same white, working class that's expected to continually decline in numbers.

"To think that we can fill all of these jobs for the huge demand that we're going to see in the next 25 years with just native-born folks is unrealistic," Stone says.

That's why nursing training programs like the one at Jewish Vocational Services are so important.

So while the future of immigration policy may be unclear, one thing we do know is there will be no shortage of people needing care.

It’s hard to avoid the hand-wringing about aging demographics in New England these days. The region's six states have the six lowest birth rates in the country. Maine, New Hampshire, and Vermont have the oldest populations in the country, and Connecticut, Rhode Island and Massachusetts aren't far behind.

Every Sunday an ad hoc group of friends and acquaintances meets to play a game of pick-up soccer… the teams are fluid, and there's no referee, but they play a spirited game, with players shouting in both Spanish and English…

Alfredo is decked out in neon yellow socks and cleats, and his hair pulled back in a small bun…he plays a mean game, fast footwork. To protect his privacy … we’re only using his first name.