In the northeast U.S., there is less than 1 percent of old growth forest left. A new University of Vermont study finds that harvesting trees in a way that mimics old growth forests not only restores critical habitat, but also stores a surprising amount of carbon.

For a forest to be considered "old growth," it must grow largely undisturbed, usually for several centuries. These ancient forests help foster biodiversity of plants, animal and even fungi — and can help mitigate flooding.

But UVM forest ecologist Bill Keeton wanted to see if he could take a "middle-aged" New England forest and "nudge" the forest ecosystem into old growth conditions.

It's a pleasantly sunny afternoon at the 500-acre University of Vermont Jericho Research Forest in northern Vermont, and Keeton is literally walking me through his 15-year experiment.

"[These forests are] a pretty good example of really the broader New England landscape. So everything that you're seeing here, 150 years ago was just open pastureland," Keeton says.

He says the regeneration of forests on this research plot is basically a microcosm of the recovery that happened across that New England landscape.

"This study is really about how we take this recovering secondary forests, forests that have recovered since the 19th century, and kind of nudge them along toward older, more architecturally complex condition," says Keeton, who conducted the study along with UVM graduate student Sarah Ford.

Using tree shears and a skidder, the researchers have engineered several plots of this middle-aged forest to look much more like an old growth forest.

But before visiting that plot, Keeton takes me to the control plot. It's 5 acres of untouched trees; the idea here is to measure how the forest would have grown if scientists hadn't tinkered with it. 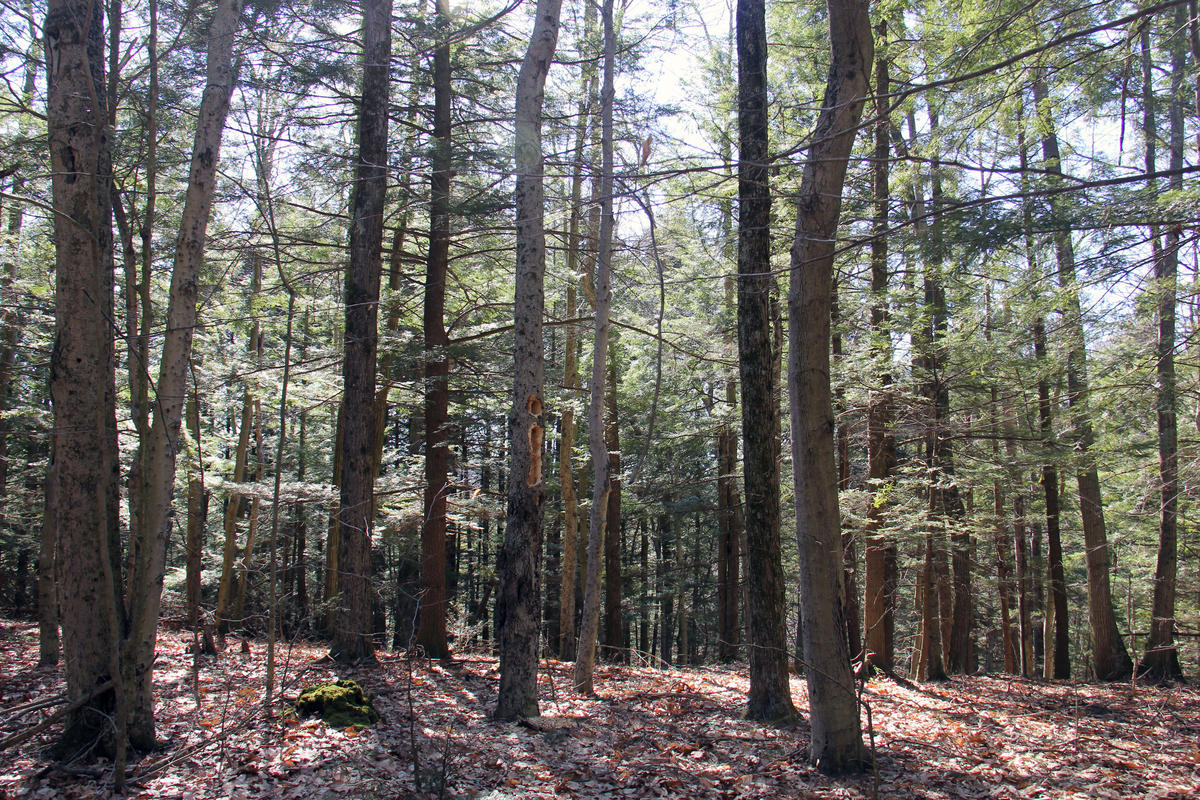 "All the trees are roughly the same age, there's a single layer in canopy, there aren't a lot of interesting habitat features like dead and dying trees that are important for wildlife," he says. "It's just very uniform, homogeneous."

But about a 10-minute walk away is a plot that's been engineered to mimic old growth forest conditions. Just like the control plot, the trees are about 70 to 100 years old, but this forest looks noticeably different.

"So you're coming into one of the structural complexity enhancement units, and I want to see if you notice any changes as we walk in. Anything look different to you?" Keeton asks.

I point to a large downed tree, roughly 60 feet long, whose roots have tipped up into the air. Forgetting its scientific name, I call it "an overturned, giant stump."

"This is a tip-up mound. So we made this," Keeton explains, pointing out all the different habitat niches in the roots and in the cave-like ditch left underneath.

Tree falls like this would happen naturally over time, usually from wind or storms, but in this case the researchers pulled over the tree using a cable. 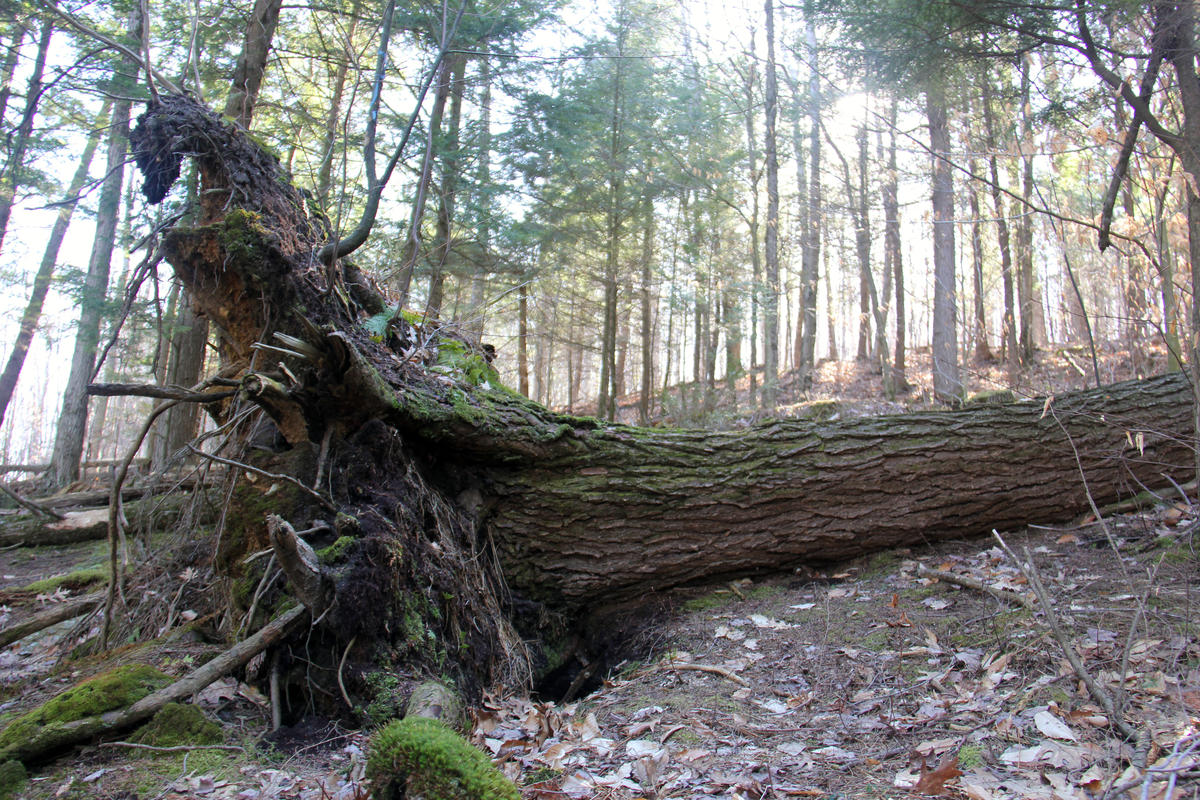 "We needed to take it down to free up growing space for other trees, like that one right there, that nice big one that we're trying to crown release, so that one can grow to a really big size," says Keeton.

"And in doing this we create this great down log, which is habitat now for amphibians, small mammals, invertebrates."

The researchers also girdled some tree limbs to create dead branch snags, which also provide key animal habitat. Other trees were selectively harvested to create gaps in the canopy, letting in sunlight to the forest floor.

The "old growth" engineering technique succeeded in creating diverse habitats. But the kicker, Keeton says, is that it has also allowed the forest to store a significant amount of carbon, much more than several other conventional tree selection harvesting techniques. That's key to fighting climate change.

Now, forests that are left alone — with no trees harvested — store the most carbon. But Keeton's study is finding that it is possible to manage the forest to maximize carbon capture, and still keep it a working forest.

Keeton says after 10 years, the old growth forest management plot stored nearly as much carbon as the unlogged control forest. It came within 16 percent of carbon storage in the unharvested plots.

"This does not just have to be a science project. This is a potentially very practical tool that many forest owners could use," says Fred Clark, the director of the national Forest Stewards Guild.

Clark says Keeton's work shows landowners who are interested in managing their forests for habitat and biodiversity that they can do that and still make some income from the land.

That's income from harvesting select trees, and from a relatively new income source:

"We have forests, primarily large-forest ownerships throughout the country, are now taking advantage of the California carbon market by developing and registering what are called carbon offset projects," Clark says.

It’s not just California. Quebec also has a market where forest landowners can sell carbon credits. Typically businesses buy these credits to make up for their pollution emissions that go beyond what they're allowed to pollute by state or regional laws. These carbon markets are still in their infancy. 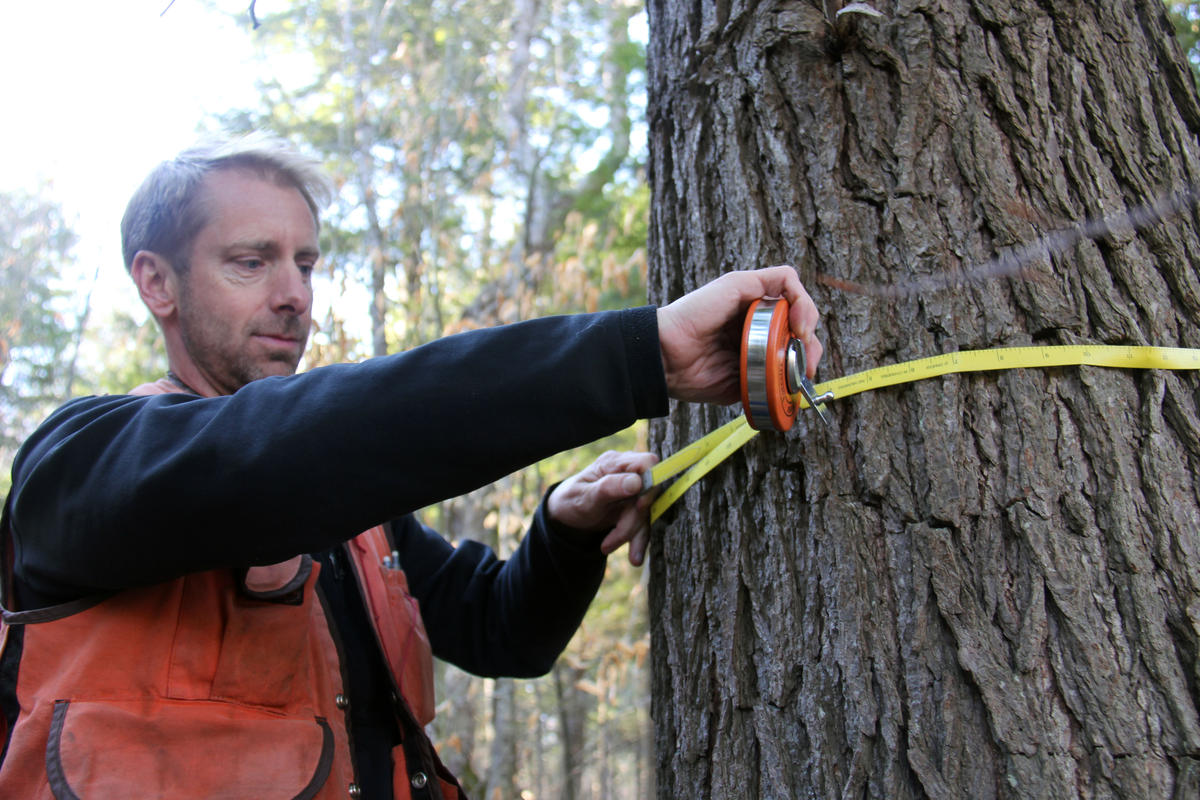 Back in the woods in Jericho, Vermont, Keeton says he was surprised that the old growth management technique actually brought in decent revenue. In fact, the technique made a bit more money than harvesting trees in a group selection, but not as much money as individually selecting and harvesting all large-diameter trees.

"So that was promising to us. Now in absolute terms, again, we harvested about 60 to 80 percent less volume. This is not going to maximize your commercial revenue, it's just not," Keeton says. "But in the right situation, for the right type of landowner, depending on their objectives, it might be something that they could consider."

And if carbon markets continue to grow in the future, that would add even more financial incentive.

This report comes from the New England News Collaborative: Eight public media companies coming together to tell the story of a changing region, with support from the Corporation for Public Broadcasting.

No More "Addicts?" How One N.H. City Wants To Overhaul Your Addiction Vocabulary

“We need to talk about substance use disorder like the disease that it is,” health educator Aly McKnight told a captive audience of thirty or so in the basement of Nashua Public Library last month.  She pointed to a list of “stigmatizing” words projected onto a screen. “Alcoholic,” “junkie,” even “addiction” should be avoided, it said.

The head of the Catholic Diocese of Manchester, NH has instructed clergy not to house unauthorized immigrants facing possible deportation.

According to Tom Bebbington, Director of Communications for the Diocese of Manchester, the Bishop had received questions from priests about how to respond to news of increased deportation enforcement. On Friday, the Bishop sent a letter to local church leaders urging them not house unauthorized immigrants in their churches.

But how do immigration agents find undocumented but otherwise law-abiding immigrants? New England News Collaborative Executive Editor John spoke with reporters Kathleen Masterson from VPR and Emily Corwin of NHPR about big differences between how the states approach working with Federal Immigration officials.

The number of people detained in New Hampshire by federal immigration authorities since Donald Trump took office was greater than the number detained any of the previous six months.

In his revised executive order, President Donald Trump has cut the number of refugees allowed into the U.S. by more than half. But since the fall of last year, nearly 1800 refugees have already re-settled in New England, and more than a third of them are children and teens.

At Philip G. Coburn Elementary School in West Springfield, Massachusetts, students come from all over the world.

"My Mom and Dad are from Sudan."

"My Mom and Dad are from Iraq"