The Longest Canoe Trail In The Northeast Marks Its First Decade

This year the Northern Forest Canoe Trail marked the 10th anniversary of its official opening.

From its western end in Old Forge, New York, the trail snakes steadily northeast across Vermont, briefly into Quebec, then across the narrow top of New Hampshire. Finally, it takes the long way across Maine to end in Fort Kent.

Will Lathrop of Bound Brook, New Jersey stopped by the trail organization’s offices in Waitsfield this week to talk with staff about the end-to-ender he’d just finished. So far, more than 100 people have accomplished the feat.

Lathrop says it took him a month and a half to paddle the trail’s 740 miles, along rivers, through lakes and over the portages that connect waterways and the eight watersheds it passes through.

“On the trail, sometimes you’re running into Appalachian Trail through-hikers and you’re not sure how to evaluate your experience compared to that. Because it was like, ‘I’m out here for six weeks. It’s not a lifetime.’ Sometimes it almost felt very short towards the end. But it’s great,” says Lathrop.

Comparisons between hiking routes like the Long or Appalachian trails and the Northern Forest Canoe Trail are inevitable, but there are differences.

The hiking trails were made by people blazing routes through the forest.

The canoe trail is a naturally-occurring series of waterways. It’s based on historical routes used by Native Americans and early settlers.

The well-known hiking trails can be traversed with relative ease by average hikers, but there are parts of the Northern Forest Canoe Trail that require a high level of paddling skill.

Like the experience of traveling on them, there are also differences in the way the trails are managed.

Increasingly, hiking trails like the Long Trail are preserved by purchasing land and easements.

The Northern Forest Canoe Trail has taken a different approach.

“We don’t own anything. We own no land whatsoever,” says Karrie Thomas, the trail organization’s executive director. 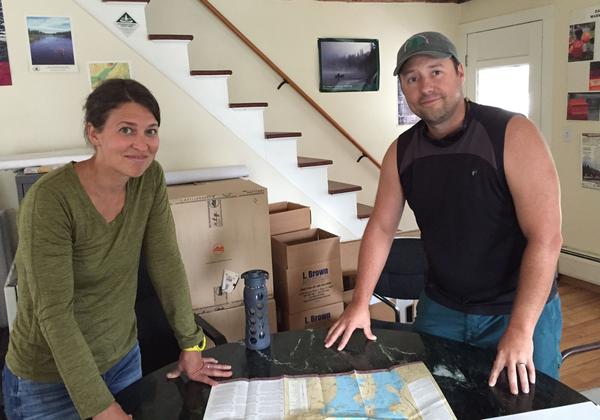 The waterways are public, but they pass through private land, especially in Vermont and New Hampshire. Thomas says what is critical is access to or through that land.

“You can only paddle so far before it gets dark and you need to get out of your boat. If it’s only private land around you, you’re going to be stuck. And that’s where we come in,” she says.

The organization has worked with landowners to create places where paddlers can easily access the trail. Agreements have also made it possible to build campsites and establish portages.

Thomas says when the trail was first conceived by the former owners of Mad River Canoe, it was also seen as a way to boost local economies in the Northwoods.

“They saw this as a great destination that was running through an incredible landscape, but the economy in this landscape has been changing dramatically over the past decades,” says Thomas.

The organization works with local paddlers and groups to promote outdoor recreation, organize youth programs and put on community events.

Most people who paddle on the Northern Forest Canoe trail are doing short legs in one of its 13 sections.

They might not even know they’re on a designated route from New York to Maine.

“In so many ways it’s a 'choose your own adventure,' and we’re just trying to understand how the use of the trail is occurring from year to year,” says Walter Opuszynski, the organization’s trail director.

Knowing how it’s used and where the highest usage occurs is important in determining how resources and the efforts of 55 trail maintainers and hundreds of volunteers should be deployed.

“We want to match our infrastructure with that increase in usage,” he says.

Today it’s possible to paddle the entire trail, to portage when necessary, camp at one of hundreds of campsite along the way or stay in a local B&B. A guide book and extensive series of maps show the way.

Opuszynski says if the first 10 years were about creating infrastructure, the next decade is about making sure stewardship of the trail keeps pace with increased use when it comes to issues like waste management and the control of invasive species.

“Success in 10 years, we have more landowners that we have agreements with and all of our partnerships are flourishing where we’re able to work together collectively and achieve these common goals we have of good water quality, well-managed recreation and robust rural economic development,” he says.

It’s estimated that 9,000 to 10,000 people use the Northern Forest Canoe Trail annually.