Purchase your tickets for a chance to win $25k toward a new car or $20k in cash during NHPR's Summer Raffle!

The dark blue, predawn sky was just beginning to brighten over Mesa Arch — a once-hidden gem in Utah's Canyonlands National Park — as Jonathan Zhang frantically set up his camera and tripod.

The Los Angeles tourist wanted to get the perfect shot of the sun rising over deep, tan canyons and red rock spires, framed by the glowing, orange arch. But he had to squeeze through throngs of other photographers and smartphone-wielding tourists to do so, nearly 50 people total.

There was an Italian man with long, brown hair sitting next to a time-lapse camera rig. A bearded, college-aged man was FaceTiming the sunrise for his friend.

The busy scene was not how it looked when Zhang first came here a decade ago.

"There were only two or three guys," he said. "But now it's like, every morning it's crowded."

That's because Mesa Arch has joined the growing ranks of places in the United States that have become #Instafamous. The landmark first gained popularity in 2010 after Microsoft used a picture of the sunrise there as one of its default backgrounds for its Windows 7 operating system.

The sandstone formation has since caught on in social media circles and has been tagged on Instagram more than 25,000 times.

But the growing crowds at Mesa Arch aren't an isolated phenomenon. All across the country, more people are flocking to national parks and public lands with smartphones in their hands.

Horseshoe Bend in Arizona, for example, was once a sleepy, locals-only pitstop on the side of a highway until beautiful photos of the Colorado River there went viral on Instagram."

Now around 2,800 people visit the landmark every day, according to data from the National Park Service. Across that agency's eight-state intermountain region, visitation to national parks and recreation areas has increased by 37% since Instagram was first founded in 2010.

But is social media solely to blame for the big crowds at national parks and public lands? The evidence is anecdotal.

"There hasn't been a study done yet that's been published that's been able to show a direct cause and effect," said Ashley D'Antonio, a recreation ecologist and associate professor at Oregon State University.

A strong U.S. economy and low gas prices are more probable drivers for increased visitation than social media, according to D'Antonio, though she acknowledged that many of these new tourists are sharing photos on Instagram and Facebook. This isn't necessarily a bad thing, she argued.

The National Park Service and other groups, for example, have been using social media to try and diversify the kinds of visitors who travel to places like Yellowstone and the Grand Canyon.

"Most of the visitors to our parks and protected areas are upper middle class, white and slightly older," D'Antonio said. "There's been a lot of groups that use social media to get more people of color, or people that aren't traditionally seen in our protected areas, out promoting and saying that this is a space for you, too."

In 2018, a California woman fell to her death at Pictured Rocks National Lakeshore in Michigan while trying to take a selfie. Similar incidents have happened at Grand Canyon and Yosemite national parks. At Yellowstone National Park, a woman was gored by a bison while attempting to get a selfie with the animal in 2015.

Park officials there have now instituted a voluntary safety pledge visitors can take that includes a warning on selfies.

"No picture is worth hurting yourself, others, or the park," the pledge states. "Be aware of your surroundings, whether near wildlife, thermal areas, roads or steep cliffs."

No one has fallen to their death at Mesa Arch yet. But as the landmark has become more popular with the selfie-taking crowd, tensions are brewing between tourists and serious photographers such as Drew Armstrong and his two friends. They watched as a young woman struck a yoga pose in front of the arch.

"It's frustrating when they want to get a shot with their Lululemon pants because they're wearing Lululemon pants," Armstrong said. "I want them to be here and say, 'You know, this is important. This needs to be protected.' "

Armstrong and his two friends believe that, in the rush to take selfies and post them, people are missing out on what makes national parks and public lands so amazing in the first place.

"Solitude, peaceful moments and nature," said Neale Zingle, Armstrong's friend. "We're so focused on saying, 'We were there.' So focused on having that information that people think you can capture on a snapshot. But you can't do that. You have to take the time to experience it. It's sort of an old-fashioned approach. But there's no shortcut."

Zingle and his friends have been taking photographs around Canyonlands National Park for the past three decades. This new breed of "selfie tourist" appeared to get under their skin. But it didn't seem to bother Zhang, the Los Angeles photographer, too much. He was finishing a time-lapse of the sunrise over Mesa Arch.

"I think it's getting crowded," he said. "But you can't really prevent people from coming. It's public land. They have a right to see these things, too."

As the sun climbed above the arch and the day became warmer, the big crowds aiming to get their perfect shot began to dwindle. Eventually no one was left. The Instagram moment was over — at least until the next sunrise.

This story was produced by the Mountain West News Bureau, a collaboration between Wyoming Public Media, Boise State Public Radio in Idaho, KUER in Salt Lake City, KUNR in Nevada, and KRCC and KUNC in Colorado. 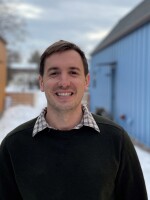