For One Transgender Vermonter, Rural Location Hasn't Hindered Her Transition

When I pulled up to the house in Windham she shares with her parents, 26-year-old Selene Cummings greeted me, wearing a sun dress and lip gloss. She brushed her sandy blonde hair over her shoulder and down her back.

Cummings lives on a dirt road in a decidedly rural area, but for her that hasn't been a hindrance to her transition.

After the hurdle of coming out to her family, Cummings told me her struggles are basically the same as any other millennial's. We talk more about dating, job searching and paying off student loans more than gender politics.

Our conversation reveals that the only real lifestyle difference between us is that she takes two pills every morning:

“This is the progesterone,” she says, showing me the inside of a pill canister. "That's the estrogen. There you go, a little green one, a little white one. And that's it,” she explains. Cummings says she can get her prescriptions filled at any pharmacy, making it easier for her to get what she needs.

“And that's it? That's the only difference between your womanhood and my womanhood?” I ask.

“Yeah, pretty much,” she says. 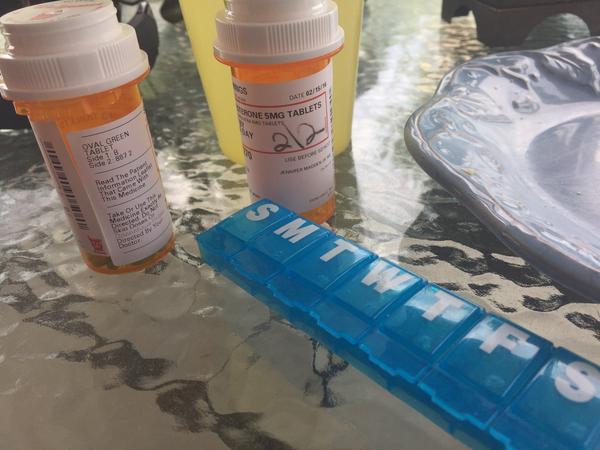 Cummings' middle name is Alice, after her grandmother. She says her grandmother was the one who helped her family better understand and accept Selene's transition.

“I came out to her just before a two-hour car drive. I was that confident, apparently,” Selene remembers with a laugh. “And she was all for it. I think once I came out to her, everyone else in the family was just like, 'Yes! Thumbs up!' I had full support from the whole family.”

Cummings acknowledges her experience may be different than other people transitioning. She says about half of transgender people have reported being kicked out of their house after they came out to their family.

But, despite transgender issues coming to the forefront of the news cycle and political agenda, Cummings says she's just trying to figure out who she is, like everyone else.

“Knowing who you are is, I think, a really powerful thing and not all people find themselves in their life. I think that is probably one of the most important things in life — to figure out who you are,” she says. “Some people just know, other people have to take estrogen and progesterone to figure it out.”

Her rural life does present one unique challenge — the hour and half drive to see her doctor at the Dartmouth-Hitchcock Transgender Clinic in Lebanon, New Hampshire.

Dr. John Turco, an endocrinologist, started the clinic. He remembers treating a woman in the early 80s named Trisha who came from rural New Hampshire — the first person he helped transition.

“I never heard of transgender patients in medical school, didn't know at all how to take care of them," Turco says. "But I started to learn from Trisha on that appointment and then very quickly realized there was a whole bunch of these individuals. Once the word got out that I saw this one patient, before I knew it, I was seeing many more patients.”

And Turco says medical care has come a long way since then.

While it's difficult to know exactly how many people are transgender, Dr. Turco says it is likely about one in 100 in the general population. Over the last 30 years, Turco says he has helped hundreds transition.

“We talk about this rural situation and some people can say, 'Well, fortunately this is not an issue in our area because we don't have any transgender,’" Turco says. "I mean, there are transgender individuals everywhere."

"I think depending upon their sense of whether it's safe for them to come out is whether or not they're going to be visible," he says.

This month, the surgeons, endocrinologists, social workers and administrators at Dartmouth Hitchcock are coming together to better consolidate care for transgender people in Vermont and New Hampshire.