Support the news you rely on from NHPR and NPR with a gift today!
Inside NHPR
Station News

Peering through the fog of war

So many of us are riveted to the news from Ukraine, disbelieving that a war of conquest could be launched in Europe in 2022 and dismayed to see the tools of propaganda and disinformation deployed with such cynicism.

This is a moment when being a member station of NPR stands front and center in New Hampshire Public Radio’s identity. NPR’s correspondents on the ground in Ukraine and Russia are reporting the military, political and human stories with integrity and insight, often while in physical danger. In 40 years as a journalist, I cannot remember war coverage so centered on the lives and voices of civilians. Reporting from the BBC and The World add depth to NHPR’s global coverage. And NHPR journalists are describing the fallout at home, as with this report from a  Ukrainian Catholic Church in Manchester.

It’s also a moment when your judgment and discernment as a consumer of news is essential. You can trust that the news you hear on NHPR and read on NHPR.org has been evaluated and confirmed by professional journalists. But in this age of social media, all of us have many sources of information – some of which show up on our screens without our inviting them in or knowing where they come from.

Every week, Brooke Gladstone and her colleagues at On the Media bring clarity to the workings of the misinformation machine and explain the interests setting out to weave false narratives. This week’s show is all about information and its abuse on the battle lines in Ukraine; I strongly recommend catching up to the episode online or on your smart speaker if you missed it on NHPR over the weekend.

The OTM team (which I was honored to supervise when I was at WNYC) has issued a useful guide to being an informed consumer of Ukraine news. We’re republishing it here. Perhaps you’ll want to post it near the screen where you scroll through the latest news, commentary and – unfortunately – nonsense about this ugly conflict. 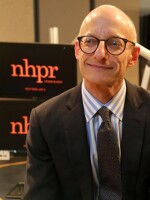