Larry Groce - "When the Mist Clears Away" - Live from Mountain Stage

Although he's hosted over 850 episodes, it's been a long time since Mountain Stage host Larry Groce has performed a set of his own on the show. But he does this week, with songs from his first album in over two decades, Live Forever.This week's broadcast also features performances from seminal indie pop band Guster, established singer and entertainer Robert Earl Keen, and Americana folk band The Westies.

Like what you hear? Download the entire show right now on the Mountain Stage podcast (just look for Ep. 862). While you're at it, leave us a rating/review and send us a tweet with your favorite song: we're @mountainstage. 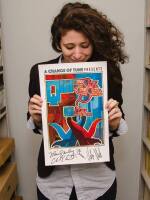 Joni Deutsch
Joni Deutsch was born and raised in Charleston, West Virginia, and graduated from West Virginia University with a degree in public relations and advertising. After learning the radio ropes atWLUR91.5 FM in Lexington, Virginia, Joni returned to the Mountain State and joined the West Virginia Public Broadcasting family as the creator and host of the weekly indie/alternative music program A Change of Tune and the critically-acclaimed 30 Days of #WVmusic interview series.
See stories by Joni Deutsch
Latest Stories