How The Military Prepares Soldiers For Civilian Life After Deployment

Ret. Col. Jon Coffin spent ten years debriefing soldiers who were returning from war zones to help identify potential cases of PTSD. He led group debriefings of soldiers while they were still intact with their platoons, after they left the combat theater but before they reunited with their families. Coffin says he asked them three questions: Who are you, and what did you do over there? What did it feel like to touch ground in the U.S.? What moment of your deployment is frozen in your mind, and what do you want to say about it?

That approach to coaching soldiers to talk through their experiences is radically different than what author Karl Marlantes remembers of coming home from Vietnam.  Marlantes draws on his experience in the novel Matterhorn and in the nonfiction book, What It Is Like To Go To War.

Marlantes and Coffin are our guests Wednesday on Vermont Edition to discuss the impact that war has on soldiers and their communities. Both are speaking at the annual William E. Colby Military Writers' Symposium at Norwich University this week. 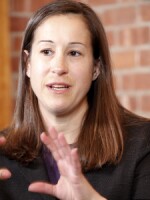 Patti Daniels
Patti is an integral part of VPR's news effort and part of the team that created Vermont Edition. As executive producer, Patti supervises the team that puts Vermont Edition on the air every day, working with producers to select and research show ideas, select guests and develop the sound and tone of the program.
See stories by Patti Daniels

Jane Lindholm
Jane Lindholm is the host, executive producer, and creator of But Why: A Podcast For Curious Kids. Until March 2021, she was the host of the award-winning Vermont Public Radio program Vermont Edition.
See stories by Jane Lindholm
Latest Stories