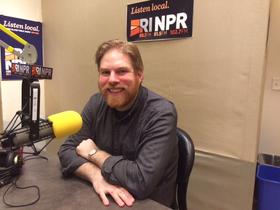 Shaykin defines graphic design as everything that gives identity and voice to communication. In the case of a campaign logo, that communication has at least two stages. There is the instant message you get when first looking at the logo.

"Logos are about first impressions," says Shaykin, but he adds, that's just the beginning. "It’s really about how it gets used and what kind of associations we put on it."

I want to start with one that really attracted my attention: the Hillary Clinton logo. This one seems to be the most abstract. It doesn’t have any words in it, and what I got out of it, when I first looked at it quickly, was that it was a real estate ad, because to me it looks like a house. 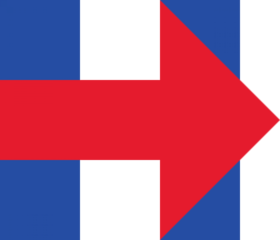 "It does sort of look like a house, on its side, I suppose," Shaykin says. "When it first was announced, it was very controversial in my world. People said, 'Oh it looks like a real estate symbol. Why is the arrow red? Why is it pointing to the right? What do these things mean, in terms of what Hillary stands for?'"

So what do they mean?

"On the one hand we can argue that it should have been pointing to the left, but then would it have looked like it was pointing backwards? You know, we read from left to right, so my guess is that the motion to the right is not about the political spectrum but is about progress," says Shaykin. He has a favorable take on this logo. "I think what’s been really interesting is seeing how they’ve been using it. That it’s red and blue on a white background, is America, meant to probably be inclusive. I think it is probably the most successful overall. It has a very coherent look. It looks designed, in a way that I don’t think is too slick, but really feels considered and thought through."

Next we look at the Trump logo. It’s his name, in shaded white letters, on a red background. It says Trump and under that it says Make America Great Again.

Shaykin's take on this is that it's basically the opposite of the Hillary logo. "I think that this speaks to his campaign and to his aesthetic, which is, things that look shiny. There’s sort of a fake shadow and some fake shine on there. And it includes the slogan, it’s sort of telling you what to think. If you compare it to Hillary’s, I think hers is a very open kind of symbol, that people can attach their own meaning to. This one feels much less sophisticated, visually, not just aesthetically, but in terms of what it’s asking from the viewer."

When it comes to the Ted Cruz logo, we have one that combines both words and abstract design elements. It's his full name, Ted Cruz, the year 2016, and then to the left, a red white and blue design that could be a teardrop, or a flame. And there’s a star, but the star kind of gets cut off on the bottom. Shaykin says this symbol caused a bit of a debate in the design world. 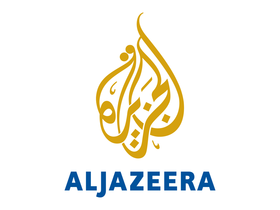 "When this first debuted people saw some similarities to the Al Jazeera logo. I doubt that was intentional," he says. "It could be a teardrop, it could be a flame, it’s a flag, obviously."

I express dissatisfaction with the way the star seems incomplete. Shaykin sees it more as a way to give volume to the shape. "The curves of the red stripes and the fact that you only see part of the star makes it feel more like a 3-dimensional thing. Visually it's a nice trick."

Shaykin also points out the typeface used in the Cruz logo. " He’s using a serif typeface, which has the little feet, the little extra pieces, more like a text typeface that you might see in a newspaper. As opposed to something bold and sans-serif like Trump or Hillary. It makes it a little softer, it’s maybe a little more old-fashioned."

We move on to the other main candidate who’s still slugging away and that’s Bernie Sanders. His logo is just his first name, with a star over the i, and underlined with blue, red and white stripes, suggestive of the flag. Shaykin sees a design that's friendly and approachable.

"This one I think is pretty successful. The typeface itself feels like something from an old schoolbook. It’s been customized a little bit. You can see where the right part of the r sort of overlaps with the left edge of the n. It feels approachable and not fancy."

As a final thought, I ask Ben Shaykin what we should or could be looking for when we see these logos now, as another tool to evaluate the candidates. He says, ultimately, a logo is only as good as the way it's used by the campaign. "It’s really not about the individual mark in the abstract. The best logo won’t save a campaign that is doomed otherwise. And vice versa. A campaign that is hitting all the right notes in terms of the rest of its message won’t necessarily be harmed by not having the best."

But it’s awfully interesting to think about and talk about.