Why Did The Bear Cross The Road? Project Aims To Create Safe Crossings For Wildlife

Conservation biologists say that the good news for wildlife is there are still extensive tracts of forest habitat in the northeast. Yet as humans have built up roads and housing developments, crossing between key habitat areas — such as from the Adirondacks to the Green Mountains — can be a dangerous trip for a moose or a bear.

To tackle this regional challenge, New England and eastern Canadian states have banded together to preserve what they have identified as nine key critical pathways between large forest habitats.

Part of the Staying Connected Initiative involves studying just how animals cross roads and other human developments, to see how to best preserve linkages between forest habitats.

Hilke says this has a real impact on wildlife populations, not necessarily individual animals, but "from a population standpoint is that there is an impact on genetic exchange, genetic connectivity."

"And so while we still have wildlife present in these islands of forest, we're concerned about a drop in genetic exchange, between these islands — so the Adirondacks to the Greens — with more and more development in the Champlain Valley, it's more difficult to make that trip."

Hilke says maintaining genetic diversity within a given species is vital to helping populations become more resilient. This is particularly true with climate change as animals may need to move into new ranges and habitats.

Earlier this fall, the governors of the New England states and five eastern Canadian premiers signed a resolution pledging to commit to conserving key forest corridors for wildlife.

The project spans more than 84 million acres of land, including large forested areas cut off from each other by highways, agricultural fields and housing developments.

Conservation biologists have identified nine critical linkages between key forest habitats— that means potential pathways that still have patches of forest where animals can weave their way between large forests. Six of these critical linkage areas are in Vermont.

On a recent picture-perfect fall morning, two conservationists from the Nature Conservancy of Vermont head out to one of these potential pathways. It's a two-lane bridge in Wolcott, and it's just one tiny link that could form part of a pathway between the Worcester range in central Vermont and the Northeast Kingdom.

Conservation biologist Paul Marangelo points to our location on the map, smack in the middle of a light green patch: "And all the light shades of green that you see here are ways that we think, through computer modeling, are the most likely places that they're going to be moving based on habitat."

"So this is great example," he says. "There's a big bridge here, its probably one of the best places on Route 15, where animals can theoretically or potentially walk under highway." 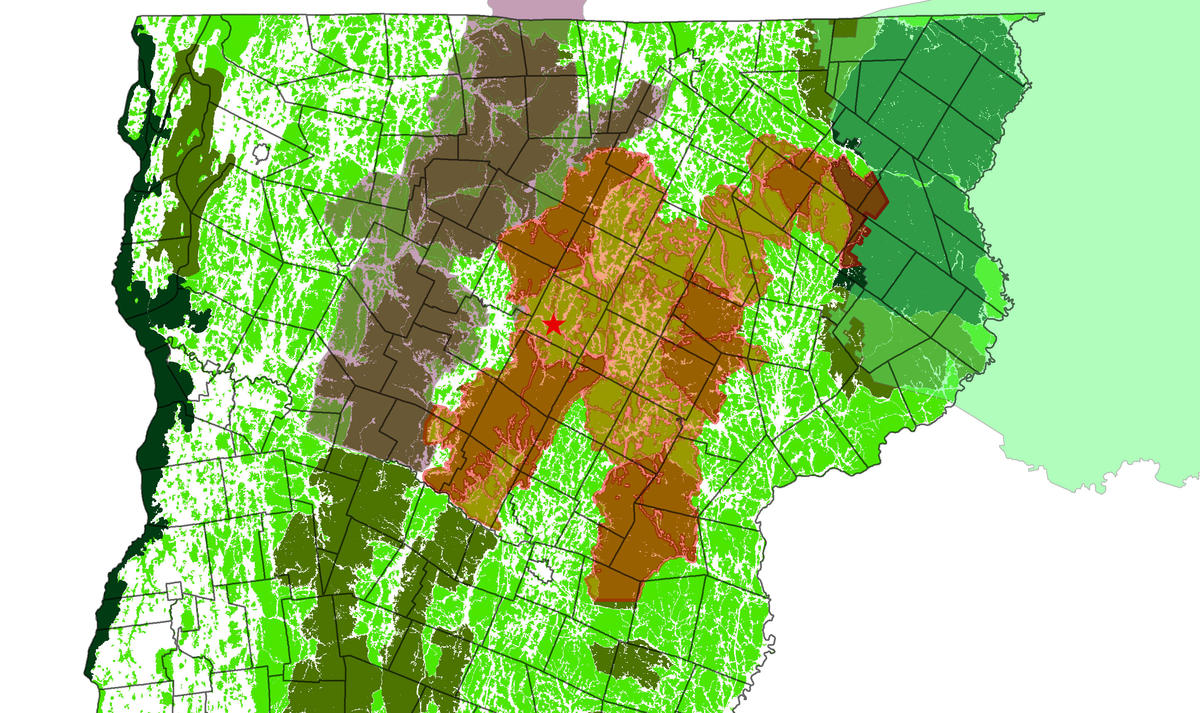 Click here to see a map of the nine critical wildlife pathway areas across the whole region.

The Route 15 bridge cross the Wild Branch, a tributary of the Lamoille River, and it's one of the few areas on this stretch that is forested on both sides of the road. Underneath the bridge, there's ample space along the river bank for animals to walk right under the road.

Why didn't the bear cross the road?

Though it's only a two-lane highway, the road is noisy, dangerous and exposed. And indeed, initial data show that some wildlife are avoiding roads.

But some animals do use culverts and bridges to cross over or under roads. So to see what characteristics animals prefer for safe road crossings — what kinds of pathways they'll actually use — biologists put up cameras in some key areas, including under this bridge across the Wild Branch.

"We also have cameras in habitat away from road," says Marangelo. "We've seen pictures of moose, bear, within about one thousand feet of this bridge, so we know they're in the vicinity. "

Yet so far those animals aren't crossing under this bridge. Marangelo says two years worth of camera photos show that right now mostly raccoons and groundhogs cross under the road here.

One reason that moose and bear are avoiding the spot could be the way bridges are built: the slope stabilizing the bridge abutments is covered with three-foot wide boulders. This can make it tricky for hoofed animals like deer or moose to pick their way across.

The Agency of Transportation's new standard is when bridges are built to fill in the crevices between boulders with dirt and grass so animals can pick a path more easily. Little details like this are already showing promise in other areas: Since dirt was filled in under I-89 in Waterbury, many deer captured on camera are using the crossing.

That's part of the camera project's goal. To see where animals are crossing, and what size bridges and culverts they use — and going forward, the study will focus on what textures and other characteristics lend themselves to animals crossing. Do animals prefer moving on grass, dirt or boulders, as opposed to walking through a metal-bottomed culvert?

This site is one of more than 20 wildlife camera sites in Vermont. Maine, New Hampshire, Massachusetts and several eastern Canadian provinces have also set up similar wildlife camera projects to record how animals are using wildlife crossings. 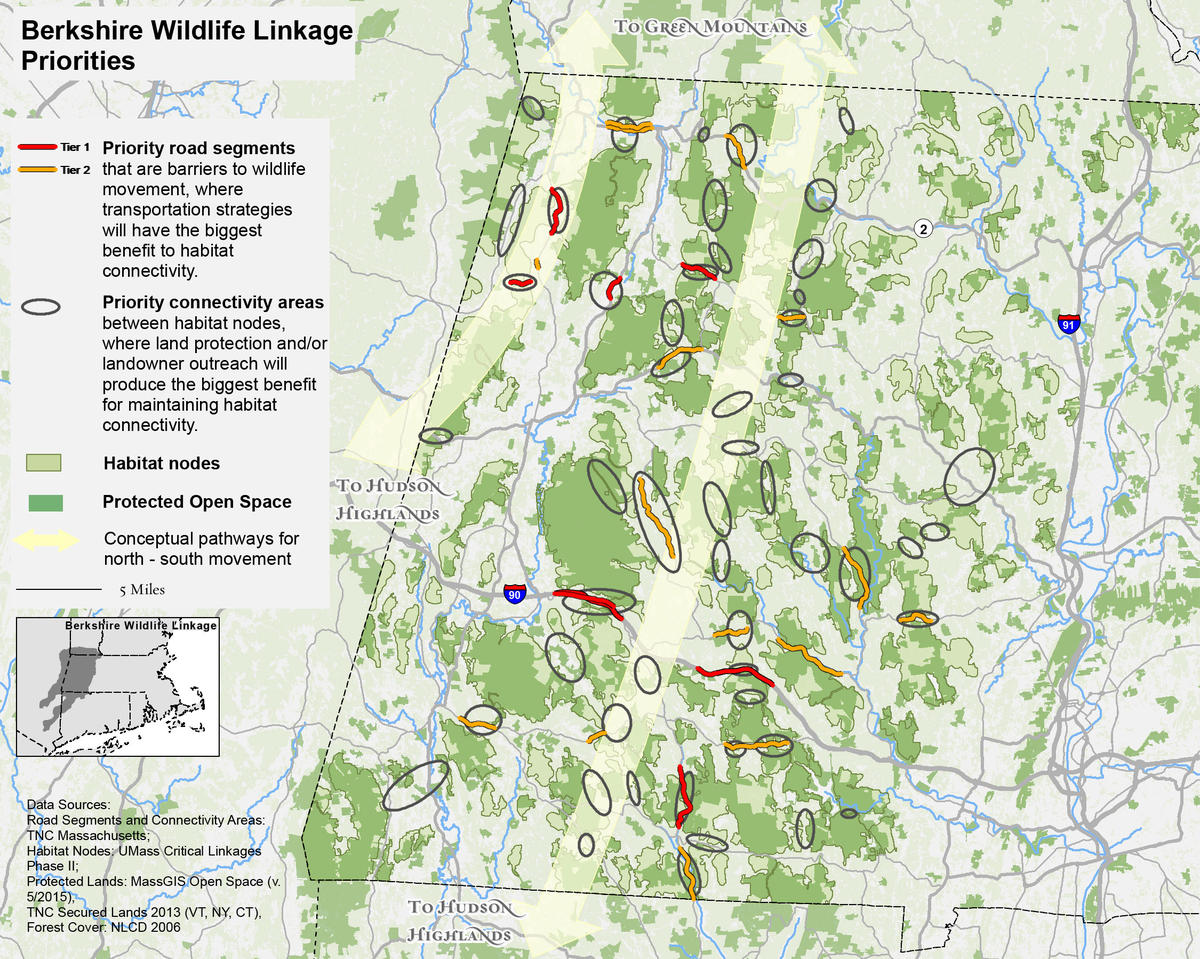 These camera sites are focused on the tiny links in bigger picture of connecting large forested areas.

"The scientific understanding at this point is that we need to have a combination of these big blocks of habitat, that are largely intact, and also to have connections between those blocks, so that either individual animals, or generations over time can move between," says Phil Huffman, the director of landscape conservation and policy at The Nature Conservancy in Vermont.

"In the world of a changing climate, wildlife, all species, are adjusting their ranges to this new reality," says Hilke. "So that movement potential between these large core, habitats becomes even more important."

That's really critical for long-term viability and health of populations.

The Vermont Agency of Transportation has already changed certain infrastructure standards. For example, all new culverts are now built at a slightly larger size compared to the stream width. And more specifically for wildlife, culverts are now required to have natural bottoms — either rocks or dirt instead of simply metal.

"It turns out in [Tropical Storm] Irene, that the transportation infrastructure that allowed for aquatic organism passage, was less likely to fail due to flooding, so again, we're talking about these co-benefits."

And creating more ways for animals to safely cross under roads could protect human lives in other ways, too — by reducing highway fatalities from cars hitting deer and moose.

This report comes from the New England News Collaborative: Eight public media companies coming together to tell the story of a changing region, with support from the Corporation for Public Broadcasting.

Black bears are as much a part of New Hampshire as fall foliage and stone walls, nevertheless they are a misunderstood species. To better understand the species, we wanted to talk to a bear, the closest thing we could get was Ben Kilham. And that’s pretty close, which is evident when you meet him. He’s over six-feet tall and moves with a slow ambling gait. His ursine tendencies aren’t surprising when you consider Kilham’s been studying and living with black bears for nearly 25 years.

Up Close and Personal with N.H.'s Catch and Release Bear Program

Growing up in Loudon, Andrew Timmins didn’t see his first bear until he was nearly 20.  Now, as Fish & Game’s Bear Project leader, Timmins manages the state’s population of more than 5,500 bears. NHPR’s Sean Hurley recently spent a day with Timmins at a bear hotspot at the Attitash Ski Resort and learned how the state regularly catches troublesome bears and relocates them to the northernmost part of the state.