Deepwater Wind has installed the first of five steel foundations for a wind farm that will sit three miles off the coast of Block Island. The project is expected to produce enough energy to power 17,000 homes. State and federal officials got an up-close look at construction for the first time yesterday. Rhode Island Public Radio environmental reporter Ambar Espinoza was with them, and she reports that Rhode Island has become an example for how to build renewable energy.

The ribbon-cutting ceremony for the Block Island Wind Farm took place on a ferry with a large barge and several cranes for a backdrop. The water was choppy at times, but the mood was celebratory. U.S. Secretary of the Interior Sally Jewell calls the project groundbreaking. 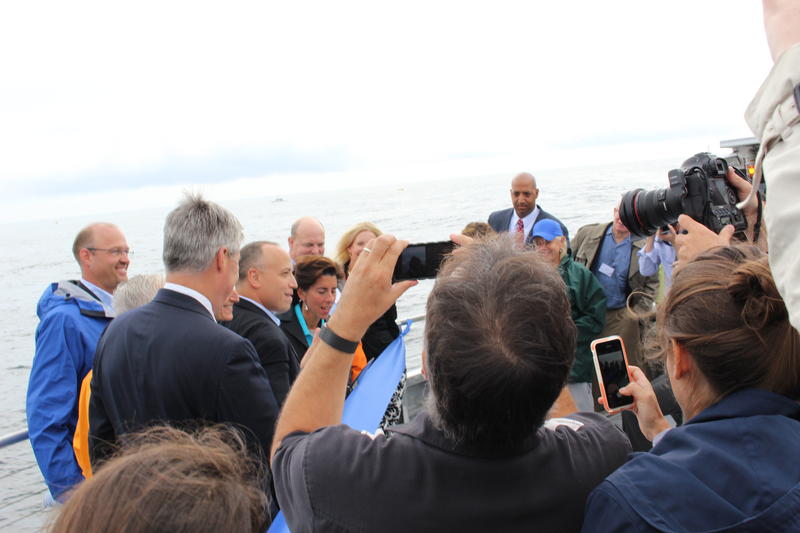 “They [Rhode Island and Deepwater Wind] showed how it could be done by getting partners together and they had their act together,” said Jewell. “They got their permits out of the way. And now a place like Block Island, which could only burn dirty diesel fuel, will now have an opportunity for clean renewable energy. And they’re going to show the rest of the country how it's done—at least the coastal parts of the country.”

The partnerships Jewell is talking about came together through a zoning process for Rhode Island's offshore waters. The state considered existing activities, such as fishing, and wildlife and archeological resources. The process is known as the Ocean SAMP, or Special Area Management Plan.

“Without it, we wouldn’t be here today—it’s that simple,” said Grover Fugate, executive director of the Coastal Resources Management Council, the agency that led the Ocean SAMP.

Before the wind farm could move forward, teams of scientists from the University of Rhode Island gathered data about the site. They looked at issues like wind speeds, geology, the impact to marine life, even the technology needed to build a wind farm at sea.

Other groups also took part in the process, including the Narragansett Indian Tribe, fishermen's associations, cities and towns, and businesses. Tricia Jedele, a vice president with the Conservation Law Foundation, said environmental groups had a say, too.

“And it was certainly a process where there were stakeholders, like Conservation Law Foundation and commercial fishermen and other organizations, that were not on the same page at the beginning of this four years ago [and] that are now on the same page,” said Jedele. “That took a lot of work. It took a lot of listening, a lot of compromise, and a lot of willingness to try to understand other people’s perspectives.”

And the stakes were high. Rhode Island is now on track to complete the first offshore wind farm in the country. Jedele said that proves that projects like the Block Island Wind Farm can gain approval without major conflict and without negative consequences for the environment.

But some Block Island residents have complained about the project. People, like Mary Jane Balser, are concerned about the impact it will have on the ocean and the cost.

“I don’t understand why anyone could see that this kind of money in a state where we still have high unemployment—20 percent, 15 percent, whatever it is, it’s higher than any other states,” said Balser. “Couldn’t that money be better spent in other communities that have great need?” (Note: The state's current unemployment rate is 5.9 percent.)

“This is a pilot project; it’s not a utility scale project,” said Jerry Petros, a lawyer who guided Deepwater Wind in securing permits and bank loans. Petros, who oversees the energy practice at Hinckley Allen, admits the wind farm won't come cheap.

“You’re not building 100 turbines,” he said. “That means that the costs are going to be higher for the energy being produced by these turbines, there’s no question about that.”

But Petros said this project is about more than money. He sees it as a commitment to a future with more renewable energy.

“If that’s the case, the only way to get it off the ground is to make some investments in the infrastructure,” said Petros. “So there’s an investment being made here in this pilot project.”

Deepwater Wind has sailed ahead of other projects thanks to a 20-year contract with National Grid, which has agreed to buy the wind farm’s energy. That's one area where another proposal for a wind farm off the coast of Cape Cod ran into difficulty. Petros said Deepwater Wind was determined not to make the same mistake.

“It’s very hard to get one of these projects into construction or off the ground until you first sell the energy,” said Petros. “So that’s where Deepwater Wind began.”

Then Deepwater Wind went through an extensive permitting process that involved nine different state and federal agencies. It took five to six years to wade through the bureaucracy, but Petros says banks will only lend to projects that have both permits and power purchase agreements.

Back on the ferry, as she marked the first signs of steel in the water off Block Island, U.S. Interior Secretary Sally Jewell said President Obama wants more permits for green energy projects, on land and in the water. The goal is to use renewables for 20 percent of the country’s total energy needs by 2020.

“We need Deepwater Wind and other offshore energy companies to be able to make our goals as we head into the latest round of worldwide climate talks, if we’re going to do something about changing the way we power our world to a more sustainable energy future,” said Jewell.

Jewell said the federal government has issued nine commercial leases for wind farms off the coasts of Massachusetts, Delaware, Maryland, and Virginia. Another auction is in the works for New Jersey later this year. And Jewell said Deepwater Wind will serve as a model for all of these projects.

“I think that this will give them  a competitive advantage because they’re learning some lessons here that are difficult,” said Jewell. “And they are expensive and people will be learning from Deepwater Wind. But they’re ahead of the game, because they have the expertise now that they’ve assembled together to make this happen.”

Jewell said now it’s up to the federal government to offer incentives to spur renewable energy and make it profitable. That means tax incentives like the ones already given to the oil and gas industries. In the meantime, all eyes are on Rhode Island, where the country's first offshore wind farm is well underway.

Do you have insight or expertise on this topic? Please email us, we’d like to hear from you: news@ripr.org.

PORTLAND, Maine — The Salt Institute for Documentary Studies is in talks with the Maine College of Art on a merger plan that could allow the Portland-based school to remain open.

Listen
Listening...
/
Murray Carpenter reports on concerns among fishermen about a plan to dredge the harbor in Searsport.

SEARSPORT, Maine - The port at Mack Point in Searsport handles ships carrying oil, gypsum, salt and forest products - even disassembled wind turbines. But as ships have grown larger, it’s become harder to for them maneuver into the port. The Army Corps of Engineers has proposed dredging a deeper shipping channel, and enlarging a basin to give them more room.

AUGUSTA, Maine - The day started out pretty well for Gov. LePage. He greeted nearly 100 supporters at the State House during an impromptu rally praising his budget priorities and "get tough" approach with legislators.

Listen
Listening...
/
Mal Leary reports on a bills aimed at preventing welfare recipients from falling off the "welfare cliff" when they get jobs.

AUGUSTA, Maine - Welfare reform is front and center at the State House this week, as lawmakers consider several proposals that supporters say are designed to help those who can get off welfare reach that goal.