At her home on Rennie Road, whenever Debbie Higgins wants a glass of water, she passes her sink and heads to a cooler of water provided by Dartmouth College.

“This is the water we use for brushing our teeth, drinking, for washing fruits and vegetables, for cooking,” she said recently, filling a glass.

It's been like this since last September, when Dartmouth notified Debbie and her husband Richard Higgins that 1,4-dioxane — a probable carcinogen — had contaminated their water.

A chemical plume had moved downhill from a burial site about 800 feet away, at Rennie Farm. In the 1960s and '70s, it was a burial ground for lab animals; human tissue and fetuses; and radioactive materials used for research, according to Dartmouth Medical School records.

The plot, which is a the top of a steep, marshy hill, is about a half an acre. Dartmouth tried to sell the property in 2011, and planned to clean up the site.

The company hired by Dartmouth to excavate Rennie Farm reported finding rusted cans filled with "deep purple-colored liquid with strong solvent odor" that had leaked into the ground and discolored the groundwater "with a purple sheen."

The digging also revealed animal carcasses that were buried deeper than previous records showed, and in layers throughout the site.

Further sampling found 1,4-dioxane and a handful of radionuclides had seeped into the groundwater. 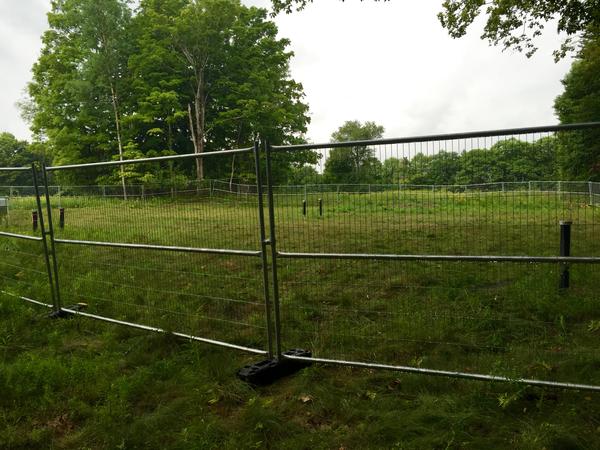 Dartmouth set up test wells on the college property to see if the contamination had moved.

Standing in the woods across from his house after a recent rainstorm, Richard Higgins pointed out one of the wells about a football field's length away from his property.

“In July of 2015, Dartmouth had a reading in this well at 520 parts per billion,” he said, tapping a branch on the metal well.

Documentation from a company involved in the cleanup corroborates this number, which is hundreds of times the New Hampshire state limit for for 1,4-dioxane in drinking water: 3 parts per billion.

“I was having some vertigo; it felt like water was in my left ear constantly and every time I tipped my head up I would get dizzy,” she remembers. “So when I went to my yearly exam I mentioned it to my doctor and she looked in my ear, like there’s nothing clogging it up, she sees nothing in there."

Debbie assumed the symptoms would pass on their own. “When we started drinking the bottled water, within two weeks I didn’t have any symptoms. And I haven’t had any since,” she said.

Both Debbie and Richard report other short-term health problems: hair loss, peeling skin in their mouths, open sores between their fingers.

Their dog was urinating blood.

It all stopped when the bottled water came. 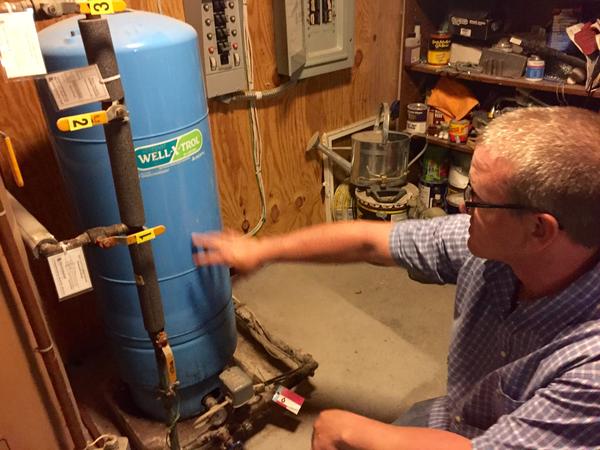 The Higgins have tried to relocate, but realtors say contaminated land in Hanover is unsalable.

To complicate matters, Debbie Higgins is a wheelchair-user, and needs to live in a handicap-accessible home. 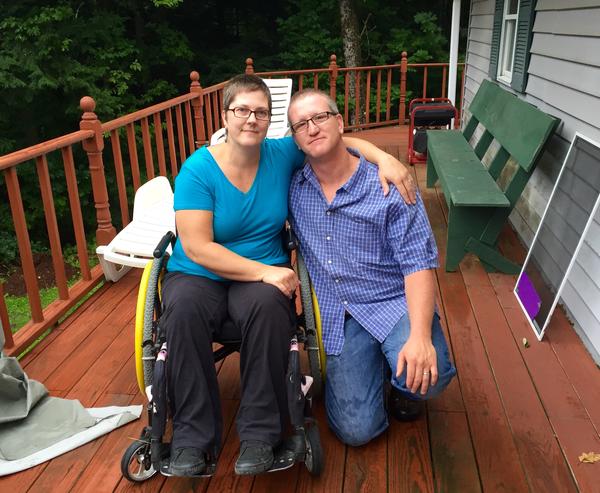 Ellen Arnold, the director of real estate at Dartmouth College, has been involved in the Rennie Farm case for years and says selling contaminated property has not been difficult, in her experience.

“Simply being adjacent to or even having contamination on your property, it will have an impact on value, but those properties are used all the time and sold all the time,” she said at her office in Hanover.

She continued: “But we are doing everything we can to make sure the contamination stays on our [Dartmouth College's] property and shouldn't impact anyone else's.”

Dartmouth has been in ongoing mediation with the Higgins. Arnold declined to comment on the Higgins' case specifically.

The college has already invested $5 million in the site cleanup.

Now, separately from the Higgins, other area residents are asking Dartmouth to do more.

New test wells are being set up past the Higgins' house, in the direction the plume is likely heading.

It is still unknown if other neighbors in the area are drinking the probable carcinogen.

This is the first in a two-part series on the Rennie Farm groundwater contamination.

Update 12:10, Tuesday, August 23, 2016: After repeated requests for comment, New Hampshire environmental officials said Tuesday that 1-4, dioxane has not been found in the 20 private wells tested to date. The testing continues, and some neighbors remain concerned that the carcinogen may be spreading to their drinking water supplies.

This Friday is the last day for New Hampshire residents to weigh in on drinking water standards for the chemicals PFOA and PFOS. These are the chemicals that have contaminated drinking water in Southern NH, on the former Pease Air Force Base, and countless other locations around the country and the world.

So get me up to date here. Friday is the deadline for the public to comment on a new rule?

Residential water sources near a Superfund site on the Seacoast have tested below the state’s standard for perfluorichemicals - including PFOA. Earlier tests at the site showed PFCs at levels significantly higher than the state standard.

Sixteen residential wells near the former Coakley landfill were tested for perfluorichemicals following the discovery of those contaminants in monitoring wells at the landfill earlier this year. All of the residential wells tested showed PFC levels below the recently established state standard.

Coakley Landfill: Yet Another Source Of Water Contamination In New Hampshire

The Coakley Landfill, a federal Superfund site located in North Hampton and Greenland, N.H., is the fifth source of perfluorinated chemicals identified in New Hampshire.

Take a look at the Merrimack, NH Water Issue Facebook page and you’ll see that people on the town's public water are not happy. Dozens call the water commissioners “unprepared,” say they are “protecting the culprit,” and need to “step up.”

Unlike other towns in New Hampshire, in Merrimack, the public water system (Merrimack Village District, or MVD) is independent from town governance, overseen by its own elected board of commissioners.

Unlike many other towns in New Hampshire, Merrimack’s public water is overseen by an independent board of commissioners and is not coordinated with town government.

A New Hampshire hospital is working to revaccinate hundreds of children after discovering that its vaccines were stored at inconsistent temperatures.

State public health officials have said the affected vaccines from Alice Peck Day Memorial Hospital in Lebanon aren't harmful but might have lost some potency. That means they could provide less immunity to disease.

The problem occurred over the course of 14 months, from September 2014 to October 2015. The hospital offered to revaccinate 827 patients at no cost to them or their insurance companies.

Things are looking up in the Upper Valley city of Lebanon, New Hampshire. A large building in the heart of its retail district left vacant by the abrupt closure of Lebanon College will become a satellite campus for Claremont-based River Valley Community College. Classes won’t start until renovations are complete next spring, but business and government leaders already see the college as a spur for further economic development.

As the fall college term gets underway, some Upper Valley students are finding themselves in limbo. That’s because they had enrolled in New Hampshire’s Lebanon College, only to find out without warning that their school was closing.

If a video designed to recruit people into extremist groups pops up online, it stands to reason that you could just flag it to have it removed and the problem is solved. But that’s not so easy. These videos are easily replicated, so one video could suddenly appear on a variety of websites. It’s time-consuming to track down and try to remove each one. One professor at Dartmouth College has developed software that would help find all those copies.