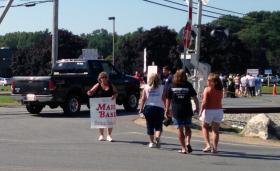 Market Basket employee Karen Bostwick, of Tewksbury, has filed a charge with the National Labor Relations Board, contending current Market Basket management is “violating the right to picket and strike.”

“She’s claiming that Market Basket interfered with her right to protest,” said Ellen Messing, a labor attorney in Boston who is not representing Bostwick but is following the case. “Basically, what she’s saying is, ‘We were protesting a management policy and they can’t fire us for doing that.’”

Market Basket's co-CEOs have not threatened to fire anyone for protesting, and no workers have been terminated during the supermarket's protracted ownership struggle.

“Saying ‘come back to work or we’ll view your job as having been abandoned?’ It seemed to me to be really overreaching,” Weinstein said.

Weinstein says employees can legally “withhold their services” if they’re in a management dispute. Management can’t fire them, or even threaten to fire them. But they can hire replacements, he said.

"If an employer is faced with people who won’t come to work because they’re unhappy with what’s going on and are withholding services to complain about it, to protest it, one thing the law does recognize is hire replacements,” he said.

That was the point of the Market Basket job fair. But now the NLRB will examine the case, launching an investigation on behalf of employee Karen Bostwick.

Market Basket declined to comment about the NLRB complaint.

Market Basket had given its employees an ultimatum to return to work by August 15 or the company would “consider you to have abandoned your job, thereby ending your employment with the company.”

Massachusetts Attorney General Martha Coakley set up a hotline for Market Basket employees earlier this month, and reminded Market Basket that all employees have rights to their salary and benefits.

“We have stressed that one of the reasons that we wanted to keep communication lines open with the employers and the employees is that there are certain rights that attach to people who serve as employees, even if they are part time and even if they don’t have bargaining rights,” Coakley said at the time.

New Hampshire Employment Security Commissioner George Copadis says claims are still coming in as the department figures out which employees are eligible.

“Over the weekend things have pretty much leveled off. We were at 1,445 on Friday and we’ve only picked up 20 since then.”

No Deal Yet For Market Basket

The family feud that has brought the Market Basket supermarket chain to its knees may be nearing its end.

Ousted CEO Arthur T. Demoulas has reportedly made a $1.5 billion offer to buy out the part of the company controlled by his rival cousin, Arthur S. Demoulas, and his allies on the board.

The board was scheduled to meet Sunday but the meeting was called off due to disagreements over some terms of the sale.

The bitter five-week standoff that has cost thousands of Market Basket workers their jobs and prompted a customer boycott may be drawing to a close.

Ousted Market Basket CEO Arthur T. Demoulas submitted a final offer to buy his family’s grocery chain on Friday. The details of the offer have not been made public.

A Market Basket representative says the board is scheduled to meet Sunday or early next week to discuss his final bid.

N.H. Market Basket Vendors Pull Out In Support Of Workers

Some New Hampshire food and beverage vendors who supply Market Basket's shelves say they're backing workers by no longer selling products to the beleaguered grocery chain.

The governors of Massachusetts and New Hampshire are stepping up efforts to broker a deal to bring the Market Basket standoff to an end.

The grocery store chain has 71 stores, all but one in Massachusetts and New Hampshire.

A Patrick spokeswoman says the "the parties have made real progress" and are encouraged that a "resolution may be within reach."