Market Basket Deadline Day: What Are The Legal Options? 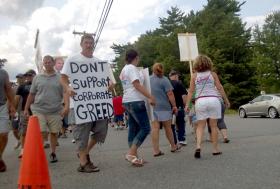 As the standstill surrounding the supermarket chain Market Basket enters its third week, the store is following through with its plan to hold job fairs — first to entice existing Market Basket employees to apply for higher positions, and then for the general public.

Today is also the deadline set by management for protesting employees to return to work. The attorneys general of Massachusetts and New Hampshire issued a warning to the Market Basket CEOs last week, advising them to follow state laws by promptly paying earned wages and benefits in full to any employees they might fire.

Federal law is more detailed — but it's unclear how it'll apply.

The Market Basket management has made repeated calls for workers to return to their jobs, and promised no penalties. But for those who don't return, the company said it would be advertising jobs.

But will it be as simple as taking applications, interviewing and hiring? And what does that mean for the existing employees who don't show up?

Market Basket can fire supervisors under federal law, and it has — those supervisors are now suing for wages, benefits, and their profit-sharing plan. But the company has not specifically threatened to fire lower-level employees. Labor law attorney Peter Moser — who's represented both employers and unions — says that’s probably by design.

"What I believe is going on is that Market Basket is assuming, although it’s a stretch, but they’re going to play it safe and assume that what these employees are doing, by walking out or engaging in a strike, or whatever you call this, they’re going to assume this is protected under the federal law, which means they can’t fire somebody for doing that," Moser said. "You read what’s actually being said is, they’re talking about having to replace the workers if they don’t return to work. And what that means whenever you say to your employer, 'Look, we're done with our strike, we're ready to come back,' well, you don't get to come back, you essentially get put on a waiting list."

So if Market Basket employees file a federal complaint with the National Labor Relations Board they’d have to allege they were threatened with firing or actually fired for engaging in a protected activity. Now the question is: What’s a protected activity?

“If you’re an employee, you have to go on strike and not be fired if you strike over your wages, or your hours, or your terms and conditions of employment," Moser said. "And so the interesting question from day one is: Is the choice of a CEO a term or condition of your employment?”

In that case a director was fired and 21 employees called in sick two days in a row. When they tried to come back, supervisors wouldn’t let them. The National Labor Relations Board found the workers had been engaging in a protected activity because the director affected their conditions of employment, and therefore the employees were wrongfully terminated.

The U.S. Court of Appeals disagreed, saying the director was in upper management and didn’t have extensive contact with employees. Moser says a court would probably make the same decision in the Market Basket case.

"And for good reason — think of it — it seems sympathetic here, because they’re supporting a CEO, well suppose it was the flip side. The flip side is, well they’re looking for the ouster of the CEO. So does that mean anytime employees are unhappy with management they can just go on strike because they want their manager replaced? That can’t be protected, it can’t be that way. It’s gotta be a management prerogative. So that’s why it really would have to be the exceptional circumstance and I think historically those exceptions have come with low-level supervisors.”

Even if the Market Basket employees somehow could prove that Arthur T. Demoulas is integral to the conditions of their jobs, the case could take years to work its way through the courts.

"If they win this, it will probably have to do with a lot more than legal factors," said employment attorney Ellen Messing. She says if there's going to be a constructive resolution to this situation, it would have to come much sooner — and would probably be forced by public pressure.

But legally, the management of Market Basket is under no obligation to come to an agreement.

Messing say if protests and boycotts continued, the company might struggle, and the businesses Market Basket buys from would likely also struggle — and lawyers wouldn't be able to do anything.

"If they want to make this set of decisions that has had this effect, nobody can hold them to account," she said.

Whatever course of action the company decides to take, it begins today — and everyone from Market Basket employees to lawyers and the general public will be watching.

Read statements released by Arthur T. Demoulas and the Market Basket Board here.

The attorneys general of New Hampshire and Massachusetts have warned Market Basket officials to be aware of the rights of workers if they fire any employees.

In a letter addressed to the board Chair and co-CEOs of Demoulas on Thursday, New Hampshire Attorney General Joe Foster and Massachusetts A.G. Martha Coakley urged company leadership to be mindful of state laws regarding employee termination and pay.

Foster says his office has seen an uptick in calls from Market Basket employees questioning their rights under the law.

Loyal Market Basket customers will often say it's the low prices that keep them coming back. The chain has long been associated with bargain prices on brand-name items, and that was before former CEO Arthur T. Demoulas chose to give customers 4 percent off their entire purchase this year.

But just how much cheaper is Market Basket, when compared with Hannaford and Shaw's?

Market Basket To Employees: Get Back To Work By Monday Or You're Fired

Market Basket CEOs say they plan to start filling positions if employees don’t return to work by Monday of next week.

In a statement released this afternoon, the company’s CEOs said employees who have been protesting the firing of former CEO Arthur T. Demoulas can return to work without fear of penalty.

However, they say they understand some employees may choose not to return, and the company will begin advertising for those jobs.

Managers of Market Basket supermarkets are repeating their threat to quit if ousted CEO Arthur T. Demoulas is not reinstated.

A petition signed by managers and assistant managers of 68 of the 71 New England stores warns that they will immediately resign if Demoulas is not restored "with full authority." They planned to deliver the petitions to co-CEOs James Gooch and Felicia Thornton.

Board members with the Market Basket supermarket chain say they're evaluating several offers to buy the chain.

Those offers include one from ousted CEO Arthur T. Demoulas.

The offers come as dozens of store managers have repeated a threat to quit if Demoulas isn't reinstated.