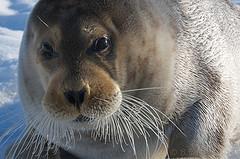 At 7:00 tonight, five seals will emerge from kennels and flop across a Biddeford beach into the ocean. It will be the final release of rehabilitated seals from the University of New England's Marine Animal Rehabilitation and Conservation Center. UNE announced last month the center would close due to financial constraints and a shift in programming. Those who rescue stranded marine animals say they're scrambling to figure out how to continue helping animals in distress.

Listen
Listening...
/
Patty Wight reports on the closing of the University of New England's Marine Animal Rehabilitation and Conservation Center.

Since 2001, UNE's Marine Animal Rehabilitation Center has helped more than 1,000 animals - mostly seals and sea turtles - return to the sea. Their releases usually elicit "oohs" and "ahhs" from enthusiasts who watch the homecoming, as captured in this video from a release of three seals in 2009, posted on YouTube:

The closest rehabilitation centers outside of Maine are in Massachusetts and Connecticut, after federal officials shut down Maine's largest seal-rescue agency in Westbrook in 2007, citing operational problems. UNE announced the decision to end its program in late May.

"That was pretty devastating for us," says Lynda Doughty, the executive director of the Kennebunk-based Marine Mammals of Maine. The organization is like the ambulance of the marine mammal world. From Kittery to Rockland, they are the first responders to calls of possible strandings.

"This is the time of year we'll see seal pups that are born," Doughty says. "It's our busiest time."

That's because it's seal pupping season, and it's also a time when more people are near the ocean and beaches and may frighten seal mothers away. Doughty says her organizaton has already responded to 50 animals since the beginning of May, and those that need rescue because of dehydration or mal-nourishment now must be transported hundreds of miles.

"As of this morning we just filled the last two spots at Mystic Aquarium," she says, "so currently there is one spot left at National Marine Life Center in Buzzard's Bay."

"Our numbers definitely have increased," says Janelle Schuh, the stranding coordinator at the Mystic Aquarium in Connecticut.  "I would say we're at two-fold the number of animals that we've taken in this time of year compared to years past."

Schuh says all of the animals they've taken in for the summer months have been young harbor seal pups from Maine. They'll stay for three to four months at a cost of $6,000 to $10,000 each.

Schuh says the Mystic Aquarium has increased capacity about as much as it can. "You can shove as many animals into a pool as you really want, but is that going to be good for the animal?"

Funding is a perennial problem, and part of the reason UNE decided to close its marine animal rehab center, says Ed Bilsky, the vice president of research and scholarship. Bilsky says when the rehab center was established in 2001, there was a concerted effort - backed by federal grants - to help restore a seal population that plummeted from years of hunting. Those federal dollars aren't available anymore, says Bilsky.

"They - looking at the seal populations and the rebound back into healthy numbers - made the switch to de-fund this particular project," Bilsky says. "It was through the Prescott Grant initiative."

Meanwhile, Bilsky says UNE is trying to equip students for jobs relevant to current needs in marine resources. The university has won a number of grants to strengthen existing fisheries management programs and develop new ones. The Marine Animal Rehab Center, he says, was a great experience for some students.

"We think that the new initiatives that we're undertaking will have just as high quality of an experience, but be able to do that for a lot more of our students," Bilsky says.

Lynda Doughty of Marine Mammals of Maine says she understands how difficult it is to keep rehab and rescue programs going. Even though she relies on 60 volunteers to help her respond to stranded marine animals, it still costs about $200 per animal.

She says her organization will launch a fundraising campaign in the next week or so. "It's our responsibility as ocean stewards to kind of help these animals," she says.

Ed Bilsky says UNE will continue education and outreach efforts to prevent strandings. And Lynda Doughty reminds the public to stay at least 150 feet away from a stranded marine mammal and call the hotline at 1-800--532-9551.

Last weekend I went to the Ossipee Valley Music Festival in my hometown of Hiram, Maine.  The festival takes place at the local fairground, with the music stages set up in the midst of 4-H barns.

Say the word "formaldehyde" and you can practically smell it. The pungent preservative is associated with everything from nail polish and hair straightener to embalming fluid and fetal pigs. But it's also an ingredient found in a wide array of household items, such as glue, floor finish, paper and baby care products.

"The whole point of the Kid Safe Products Act is to give Maine parents the right to know which toxic chemicals or cancer-causing chemicals are in everyday products," says Mike Belliveau of the Environmental Health Strategy Center.

Lawmakers in Maine are joining business owners and local officials in speaking out against a bill they say will hurt tourism in towns across the state.

The measure would remove nearly a third of the signs on Maine highways that direct motorists to secondary locations.

Officials with the Maine Department of Transportation and the Maine Turnpike Authority, which support the bill, say the law needs to be changed for Maine's interstates to comply with federal highway sign standards.

The ancient sport of arm-wrestling is enjoying a surge in popularity.

A record number of people from across the Northeast - most, but not all of them, bulky males - turned out over the weekend for the Maine State Arm Wrestling Championships at a sports bar in South Portland.

With nearly 150 pumped-up competitors - some of them world champions, some of them beginners - there was no shortage of adrenalin.