With Limited Options For Black Hair Care In The Upper Valley, One Barber Draws A Crowd

For the 5 percent of Vermonters who do not identify as white, finding a barber who has experience with a diversity of hair textures is challenging. But a barber contracted by Dartmouth College to cut hair for students of color is making a difference.

In 2015, 95 percent of Vermonters identified as white. Maine, Vermont and New Hampshire are the whitest states in the country.

In the Upper Valley, once a month, Sean Taylor sets up a swiveling barber chair, clippers and scissors in the basement of a Dartmouth dorm.

All day, students stream in to get a haircut.

“It's just one of those places where everybody is welcome. Everybody's just kind of there for the same purpose — to look good and feel good,”  he said, running a razor around the edge of one student’s ear.

Taylor is from Philadelphia, and has been contracted by Dartmouth to cut hair for students of color.

Dartmouth's Office of Pluralism and Leadership has a web page devoted to finding black hair care in the area;  Taylor is one of two people the office lists in the Upper Valley who have the experience.

“If you're a barber, I think you should be able to cater to all hair, and not think about it in a race,” Taylor said.

He continued: “It's just basically straight or curly. If you can cut straight hair, you can cut curly hair, you should be able to cut everybody's hair. But a lot of these shops out here, people aren't able to get what they want, especially the black kids.”

When he's not at Dartmouth, Taylor cuts hair at the River Valley Club in nearby Lebanon. He says people are willing to travel miles to have him cut their hair.

Carlos Tifa waits to get a trim. He moved from New York City to come to Dartmouth and is meticulous about his hair.

In the Upper Valley, that's a challenge. “Back in New York, I'd have my specific barber I'd go every two weeks, I'd have appointments. Then, coming here, I didn't factor in the fact that, hey, there may not be an outlet where you can cut your hair,” he said, patting his dyed red hair. “I think ethnic hair, you have to use a certain technique, you can't use scissors and expect it to be good.”

A handful of men chat, do homework and watch TV waiting for their haircut in the basement of Cutter Hall, the historically African American dorm on campus.

Hassan Hassen, a Dartmouth junior, is one of them. He's there to get his beard trimmed.

“The interesting part is, we get our hair cut in Cutter. That's usually a place where a lot of African American students live, and it's in the basement, and everyone's here and you're able to talk,” he said, tilting his head up, letting Taylor get a closer cut on his short beard.

“If you go to any of the shops here, there are usually just people who are not minorities who get their haircut, and they don't know how to take care of black hair," Hassen says. "So I guess that is the main reason that people come here. There's a sense of community in barbershops, and minority populations have a different feel, I believe."

Sean Taylor says the barbershop is the place where you "solve the problems of the world." 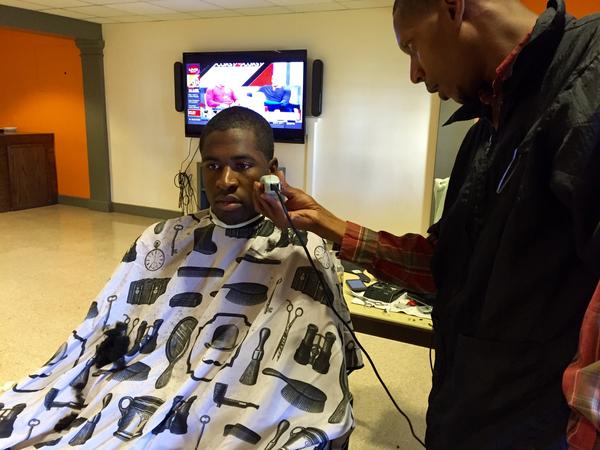 Quincy Mills, an associate professor of history and the director of Africana Studies at Vassar College, agrees.

His book, Cutting Along the Color Line: Black Barbers and Barber Shops in America, looks at the history of black hair care and Civil Rights.

Mills says since the late 19th century, black barbershops have been a space for people to feel safe about their identity and to discuss politics.

In fact, a Civil Rights protest in the 1960s boycotted a campus barber in rural Ohio who said he couldn't cut black hair.

“They would argue that, 'What does it mean that a barber had to be licensed by the state to cut hair, but yet could claim that they didn't have the skill to cut all types of hair?' What did that mean? And I think this larger principle was at stake,” Mills said.

Students say some licensed barbers in the area still turn away clients with different hair textures.

Mills thinks in places that are disproportionately white, there are larger systemic barriers to changing demographics. But a space to find community and get a good haircut may be one place to start a conversation about it.

Dartmouth College officials say a second private well near a Hanover farm where contaminated laboratory animals were buried in the 1960s and 1970s has tested positive for a toxic chemical believed to have migrated from the site.

The Hood Museum of Art at Dartmouth College is opening a new gallery space on Main Street in Hanover on September 16th.  The museum itself is closed until 2019 while it undergoes a major expansion project, but Director John Stomberg and his staff came up with a way to keep the Hood engaged in the community.

A New Hampshire hospital is working to revaccinate hundreds of children after discovering that its vaccines were stored at inconsistent temperatures.

State public health officials have said the affected vaccines from Alice Peck Day Memorial Hospital in Lebanon aren't harmful but might have lost some potency. That means they could provide less immunity to disease.

The problem occurred over the course of 14 months, from September 2014 to October 2015. The hospital offered to revaccinate 827 patients at no cost to them or their insurance companies.

If a video designed to recruit people into extremist groups pops up online, it stands to reason that you could just flag it to have it removed and the problem is solved. But that’s not so easy. These videos are easily replicated, so one video could suddenly appear on a variety of websites. It’s time-consuming to track down and try to remove each one. One professor at Dartmouth College has developed software that would help find all those copies.