This week, Bedlam – recently named one of the best young theater companies in New York City by Backstage.com – will perform two nights at the Paramount Theatre, offering early glimpses of Pygmalion and a brand new play called New York Animals.

Last year the troupe gave audiences in Rutland a preview of Chekov’s The Seagull, which they were fine-tuning for their upcoming season.

Audio from this story will be posted at approximately 11 a.m. on Wednesday, Aug. 12.

Since the company’s inception in 2012, Bedlam has been earning raves for its innovation, fierce talent and less-is-more approach to theater.

“What they communicate so well is the love not only of acting, but of actors being the ultimate readers of great scripts,” says Ben Brantley, the chief theater critic for The New York Times.

“When they did Twelfth Night, I said to my friend afterwards, who’d gone to both productions with me – and this rarely happens to me: 'This actually makes me envious of them.' There just seems to be such joy in their work and insight and you feel that vicariously as they’re doing it. This is what acting should be about, I think.”

Adds Brantley, “At this point, I’d see anything the company does.”

Five of Bedlams’ members, including company founder Eric Tucker, have been rehearsing in Vermont this summer, the past two weeks in a picturesque barn in Middletown Springs.

“It’s so refreshing,” says Tucker. “We come up here and all we have to do is focus on the work. We have very little cell service up here and spotty Wi-Fi, which is sometimes crazy. But when you let all that go we’re up here in this beautiful place and it’s magnificent; it’s a real charge,” he says, pointing to the view of mountains from the door of the barn.

Tucker says they won’t be performing finished products at the Paramount, but shows that are under construction. The audience will sit up on stage with the actors and have a chance to ask questions after the show. 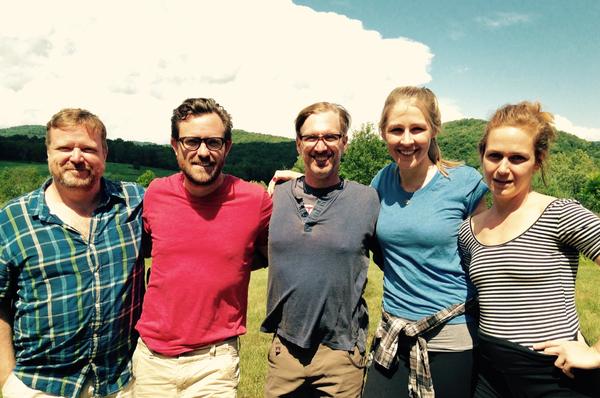 That not only creates a powerful intimacy, says Tucker, but also helps the actors gauge the audience response and get useful feedback. It's something he says is especially important with a brand new play like Steven Sater's New York Animals, which will have its world premier later this year in New York.

Sater is a Tony-award winning lyricist best known for the musical Spring Awakening. In addition to writing the script for New York Animals, he and Burt Bacharach worked together to create songs for it; songs that Eric Tucker says they’re still figuring out how to incorporate into the play.

“Steven is coming up for this,” says Tucker. “He’ll be with us all day on the 14th and that night, because it’s important to him as the writer. There’s a lot of stuff that go into making this and an audience is everything.”

Bedlam’s Stephan Wolfert says the story line of Sater’s play chronicles how strangers interact on a single rainy day in New York City. “You get to see just these slices of these people’s lives,” says Wolfert, “but so much is said with so little, you know what I mean? You get a little bit and you’re like, ‘Yeah, I’ve been to that place; I’ve been there before; I’ve been with that cab driver before.’ You know what I mean? Just these everyday moments that we’ve all experienced, but when you see them all up on stage it makes them more epic.”

Bedlam bowled critics over in 2012 when four of its members performed both Hamlet and George Bernard Shaw’s Saint Joan, alternating dramas each night.

Actor Edmund Lewis has been performing with Bedlum since the company’s inception. “The thing that I’ve always enjoyed is that the work is so specific and it’s very intelligent and we really pay attention to detail. There are a lot of performances that you’ll see and you’ll think, well, they kind of missed that moment," says Lewis. "The way that Eric works, he’s very specific about each moment and the thought processes of the characters and everything combined, so the work is very specific and intelligent and fun.” 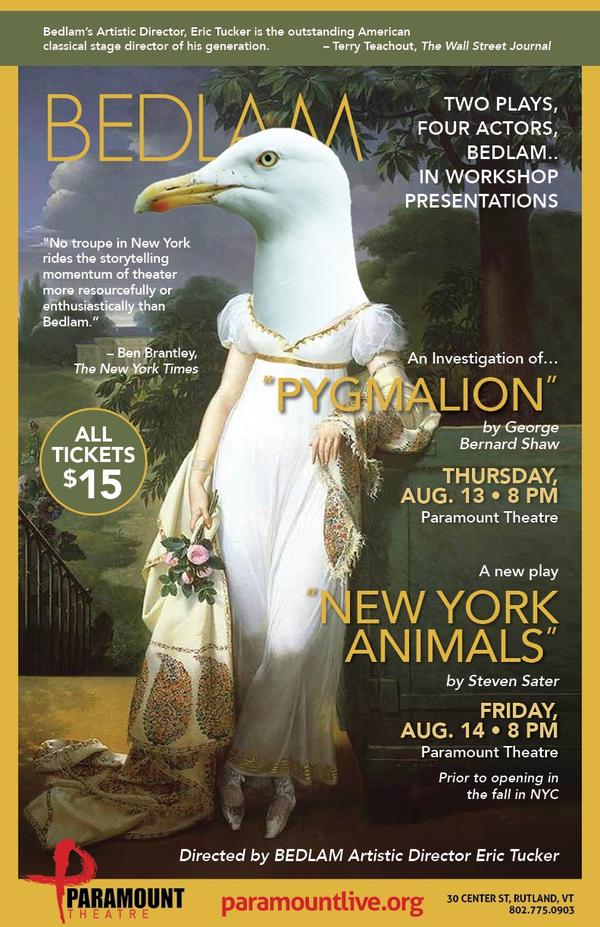 Trust between the actors is also key, says Wolfert. “Sometimes I’ll do something, screwing off before we even start, and Eric will say, ‘Oh, do that, add that.’ Adds Wolfert laughing, “I have pure terror, but I trust him so much that I would leap off a cliff if he asked me to!”

Eric Tucker says after the company’s success with Saint Joan, he was eager to take on another Shaw classic, Pygmalion. It's the story of an egotistical phonetics professor who makes a bet that he can train a poor street vendor to pass for a duchess.

“There’s a lot of darkness in that play,” says Tucker, “a lot of grit. And that’s what we’re interested in getting through to as we rehearse.”

“Because we look at the play now and we associate it with My Fair Lady and it’s all very pretty. It’s not, actually,” says Tucker. "The arcs of those characters and what they learn about each other is extraordinary. There’s a lot in that play.”

Bruce Bouchard, executive director of the Paramount Theatre, says it’s thrilling to have an acting company of this caliber using the Paramount and the Rutland area as their second artistic home. He says audiences are going to love the creative energy the group generates.

Bedlam will present a reading of Pygmalion Thursday, Aug. 13 at 8 p.m. at the Paramount and a workshop performance of New York Animals at 8 p.m. on Friday, Aug. 14. All tickets are $15 and open seating is on the stage.

More And More Veterans Visit Their Doctors Via Telemedicine

More and more members of the military are coming back from deployments needing medical attention, and Vietnam-era veterans are aging.

Listen
Listening...
/
Murray Carpenter reports on concerns among fishermen about a plan to dredge the harbor in Searsport.

SEARSPORT, Maine - The port at Mack Point in Searsport handles ships carrying oil, gypsum, salt and forest products - even disassembled wind turbines. But as ships have grown larger, it’s become harder to for them maneuver into the port. The Army Corps of Engineers has proposed dredging a deeper shipping channel, and enlarging a basin to give them more room.

Deepwater Wind has installed the first of five steel foundations for a wind farm that will sit three miles off the coast of Block Island. The project is expected to produce enough energy to power 17,000 homes. State and federal officials got an up-close look at construction for the first time yesterday. Rhode Island Public Radio environmental reporter Ambar Espinoza was with them, and she reports that Rhode Island has become an example for how to build renewable energy.

PORTLAND, Maine — The Salt Institute for Documentary Studies is in talks with the Maine College of Art on a merger plan that could allow the Portland-based school to remain open.

LEWISTON, Maine - Lewiston tenants and grassroots community organizations say three landlords in Lewiston are responsible for some of the city's worst code violations at 71 properties.