Hundreds Of Asylum-Seekers Continue To Stream Into Quebec

The number of asylum-seekers fleeing the U.S. into Canada is surging this summer, with nearly 800 people illegally walking into Quebec in June alone.

One of the most popular illegal border crossing areas is just west of Lake Champlain, along the rural Roxham Road just outside Champlain, New York.  This route began to see an uptick in traffic around the time of the presidential elections, spurred by fear of the Trump administration's attitude toward refugees. That flow of asylum-seekers has increased fairly steadily in recent months.

To handle the influx, the Royal Canadian Mounted Police has set up a huge tent complete with a generator, restrooms and chairs and tables to process all the incoming asylum-seekers.

On a recent warm August afternoon, the U.S. side of Roxham Road is fairly deserted. The pavement is littered with evidence of the high volume of traffic; there are discarded baggage claim tickets and even an old suit left behind.

A taxi pulls up and a young man with only a small backpack gets out and begins walking toward Canada.

He doesn't share his name, but he says he's from Yemen. He flew to New York City about a week ago, but he didn't feel safe trying to seek refugee status in the U.S.

He says he worked hard to raise enough money to travel to the U.S. on a tourist visa. Before leaving his home, he researched how to cross into Canada. 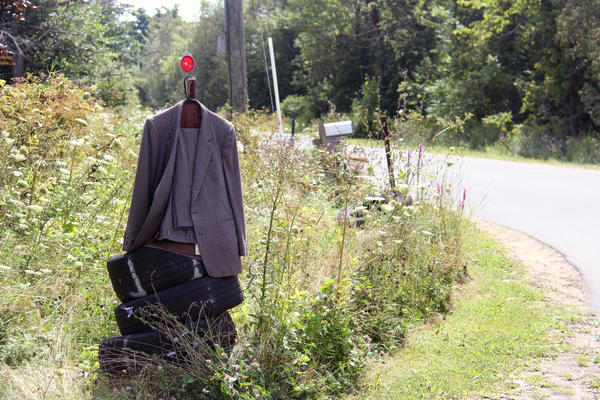 Then, a bit nervously, he turns to cross the well-trodden dirt pathway over the border.

The Canadian police who are permanently stationed on their side of this dead end road walk over when they see him approach:

"Sir, just stop right there," a male officer says, holding his hand up at chest height. "You're under arrest if you cross the border."

The young man from Yemen keeps repeating, "I have no choice," and continues to walk toward the officer until he is on Canadian soil. Once he has crossed, the police instruct him to remove his backpack and they pat him down for weapons.

The authorities will conduct a criminal background check and review his identification documents. If he's determined to not be a threat to the public, they'll help him fill out paperwork to apply for asylum right there in the tent in the woods. 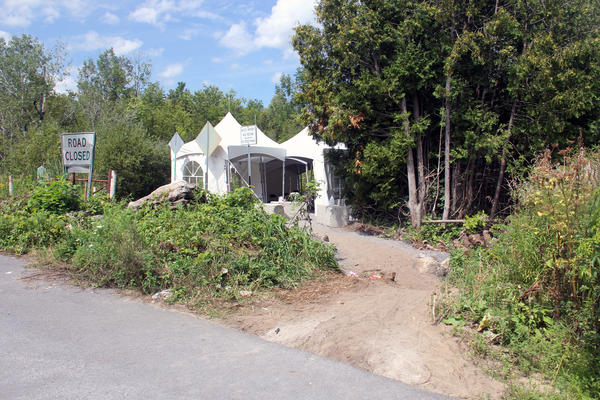 Because of a U.S.-Canada agreement, any person who is already in the U.S. cannot request asylum at a border checkpoint. That's why so many are choosing to cross illegally between checkpoints, such as right here at Roxham Road.

The top five countries of origin among people who are fleeing the U.S. are (in order): Haiti, Sudan, Turkey, Eritrea, and the United States.

That's not a typo. Some of the asylum seekers are U.S. citizens.

Canadian border officials say they are mostly children who are born to foreign nationals while living in the U.S. Canadian authorities say they don't refuse children who are U.S. citizens, because their priority is to keep families together.

Haitians make up the biggest percentage of those leaving the U.S.;  that's in part because temporary protected status for hundreds of Haitians living in the U.S. expires in January.  However there's no guarantee Haitian asylum-seekers will be able to stay in Canada either. The country recently lifted it's temporary protections policy. 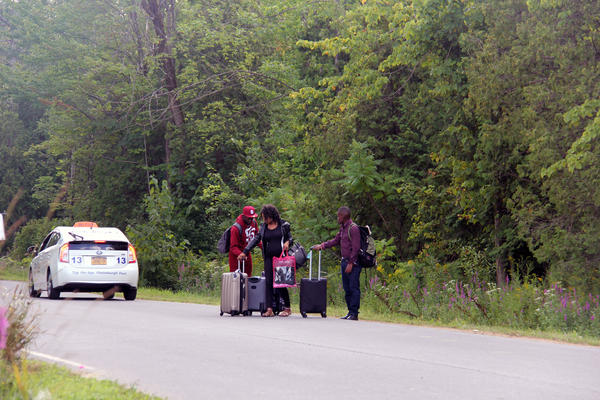 The next cab that pulls up has three people from Haiti. There are two men and one woman, each dragging a suitcase on wheels.

One of the men speaks some English. He says he has been living in San Diego, Calif., for the past year and four months. But he says he's really scared that he might be sent back to Haiti:

Then, after a brief exchange in French with the Canadian police, he and his two travel companions wheel their suitcases across the dirt path and into Canada.

It's unclear just how many of the thousands who have entered Canada this year will be granted refugee status. The review board that decides these cases is backlogged—it's at least four to five months  behind.

Yet in Canada, while people are awaiting their hearing, they can get work permits, access to health care and French classes.  For many it's worth the risk. 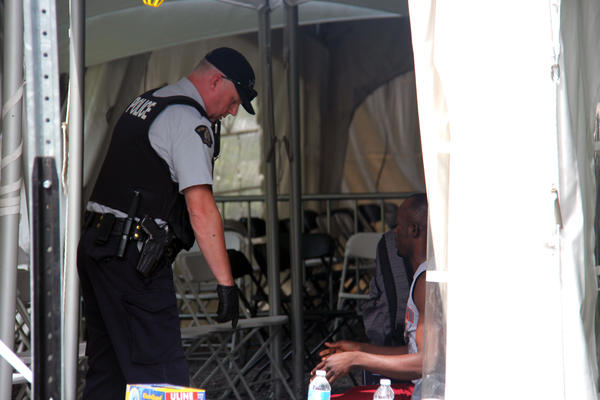 The head of the Catholic Diocese of Manchester, NH has instructed clergy not to house unauthorized immigrants facing possible deportation.

According to Tom Bebbington, Director of Communications for the Diocese of Manchester, the Bishop had received questions from priests about how to respond to news of increased deportation enforcement. On Friday, the Bishop sent a letter to local church leaders urging them not house unauthorized immigrants in their churches.

In the northeast U.S., there is less than 1 percent of old growth forest left. A new University of Vermont study finds that harvesting trees in a way that mimics old growth forests not only restores critical habitat, but also stores a surprising amount of carbon.

No More "Addicts?" How One N.H. City Wants To Overhaul Your Addiction Vocabulary

“We need to talk about substance use disorder like the disease that it is,” health educator Aly McKnight told a captive audience of thirty or so in the basement of Nashua Public Library last month.  She pointed to a list of “stigmatizing” words projected onto a screen. “Alcoholic,” “junkie,” even “addiction” should be avoided, it said.

The number of people detained in New Hampshire by federal immigration authorities since Donald Trump took office was greater than the number detained any of the previous six months.

Catholic Charities of NH has received $60,000 in federal funds to help immigrant victims of crimes perpetrated by U.S. citizens and permanent residents.

Cathy Chesley of Catholic Charities said most of the organizations eligible clients are survivors of sexual assault and domestic violence, although victimes of other crimes are also eligible.

Religious leaders in New Hampshire are holding a vigil outside Immigration and Customs Enforcement offices in an effort to show support for immigrant families at risk of deportation.

The vigil takes place from 8:30 a.m. to 9:30 a.m. Tuesday outside the Norris Cotton Federal Building in Manchester. The leaders of Protestant, Catholic, and Jewish congregations will call upon the agency known as ICE to let immigrants stay and work to keep families together.

Every Sunday an ad hoc group of friends and acquaintances meets to play a game of pick-up soccer… the teams are fluid, and there's no referee, but they play a spirited game, with players shouting in both Spanish and English…

Alfredo is decked out in neon yellow socks and cleats, and his hair pulled back in a small bun…he plays a mean game, fast footwork. To protect his privacy … we’re only using his first name.