Have You Been Attacked By A Turkey? Here's Why 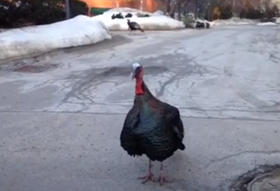 I was the victim of a senseless and unprovoked attack recently. My assailant's full identity has yet to be determined, so for now, I’ll just refer to him as Tom.

Tom is a turkey.

He looks exactly like a Thanksgiving decoration — large, with shiny multi-colored feathers, and a red head with a fleshy bit hanging off the top of his beak, which I’ve since learned is called a snood. He was in the middle of the road in Newton, and each time I started to pull away, he’d rush my car.

Then he really went for it, jumping at the car as he opened up his wings and smacked my side mirror.

The driver behind me beeped, having apparently lost patience with all of this, so I drove off. In the rear-view mirror I could see the turkey going after that guy.

I’ve learned this isn’t all that unusual. A few years back, a turkey kept going after people in Mount Auburn Cemetery, where Bree Harvey works.

“Unfortunately, the end of the story was that after the turkey continued to display overly aggressive behavior, and actually started becoming very aggressive towards our staff, we did have a staff injury," Harvey said. "The state environmental police came and euthanized the turkey at the cemetery.”

Some people were really unhappy about that. Harvey says they hadn’t been attacked.

Another turkey on Cape Cod kept harassing a mailman on his route.

“They do that more often at this time of year, just because, I guess we blame it on hormones,” said Marion Larson of the state Division of Fisheries and Wildlife.

Watch Reporter Craig LeMoult Get Attacked By A Turkey:

“We’re at the beginning of the breeding season, and male turkeys are getting much more aggressive towards each other and anything else they perceive as a threat.”

Apparently, my Toyota Corolla was a threat.

“They do decide, 'Well, I need to establish you in the pecking order,' and so they may go after people to be try to establish dominance, because they are no longer seeing people as being a threat,” Larson said.

So I was lower on the pecking order than a turkey, which dominated me?

Turkeys almost disappeared from New England, which was clear-cut for farming in the 1800s. But they were reintroduced in the last century and have thrived in recent years, even in more urban areas. I saw one last week in the middle of Harvard Square. Larson says when there’s a problem, it’s usually because a turkey has gotten too comfortable with people. Sometimes folks make the mistake of feeding them.

“We want turkeys to stay wild, and wary of people. So we advise people that every few times you’ve got turkeys going through your yard, go out and scare them.”

Turkeys in Wellesley have learned to steer clear of Sue Webb, an animal control officer there and says nuisance calls spike in the spring.

“I’ve gone up there and chased the turkey around and around their yard until the turkey finally gives up and leaves," Webb said.

Now, they recognize her truck when it pulls up.

“We had one police officer who called," she said. "His cruiser was surrounded by turkeys a number of years ago. He said the moment my truck made the corner, poof, they all vanished.”

She advises people not to stop their cars if they come across a turkey, like I did — and to keep a broom handy.

“Use that to sweep and whack at the turkey as they’re walking to their house, or from their house to the car," she said. "And just after a couple of times the turkey realizes, ‘Oh, this is a person I need to steer clear of.’”

Mass Audubon’s Drumlin Farm wildlife sanctuary in Lincoln is home to a group of turkeys, which I’ve since learned can be called either a gang or a rafter of turkeys. Tia Pinney, a naturalist at Mass Audubon, says their rafter doesn’t usually go after people, but they do sometimes freak out when they see their reflection.

“He wasn’t going after you, he was going after the phantom turkey that was in your car,” she said.

She’s seen it happen before.

“We had a turkey here in town years ago that would go after his own reflection in the old chrome bumpers," she said. "He would station himself by a stop sign in the middle of town and make a charge at various vehicles as the waited by the stop sign.”

That’s the thing about turkeys. They’re big contradictions with feathers — smart enough to recognize an animal control officer’s truck, but dumb enough to peck at their own reflection. They can be kind of regal, but also pretty goofy. And if they get to like you, it’s more likely they’ll attack you.

So, if you see some turkeys this spring, keep your distance, enjoy their beauty, and whatever you do, don’t stop your car.

Wild Turkeys Gobble Their Way To A Comeback

Wild turkeys and buffalo have more in common than you might guess. Both were important as food for Native Americans and European settlers. And both were nearly obliterated.

There were a couple of reasons for the turkey's decline. In the early years of the U.S., there was no regulation, so people could shoot as many turkeys as they liked. And their forest habitat was cut down for farmland and heating fuel. Without trees, turkeys have nowhere to roost. So they began to disappear.

By one estimate, Americans will eat 46 million turkeys on Thanksgiving.

But this story is not about them. It's about a smaller group of turkeys — about 100 who roam the wild streets of New York City. These feral birds live in Staten Island, the least urban of the five boroughs. Local officials have been trying to relocate the birds for years, but their plan has had trouble getting off the ground.