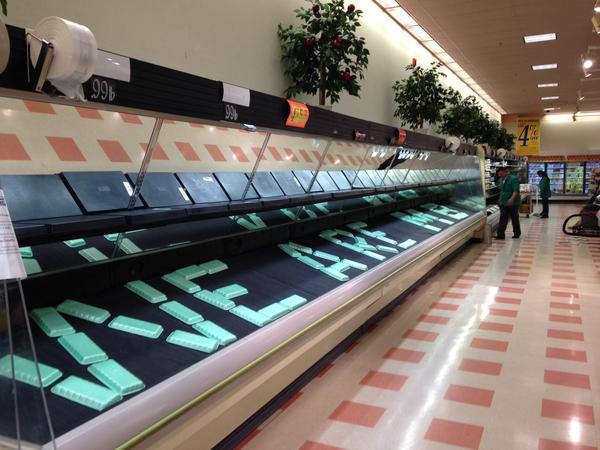 The bitter five-week standoff that has cost thousands of Market Basket workers their jobs and prompted a customer boycott may be drawing to a close.

Ousted Market Basket CEO Arthur T. Demoulas submitted a final offer to buy his family’s grocery chain on Friday. The details of the offer have not been made public.

A Market Basket representative says the board is scheduled to meet Sunday or early next week to discuss his final bid.

Earlier this month, the majority owners broke their silence, saying they had offered to sell the company to Arthur T. Demoulas after he was fired in June. They said the price was right, but the terms of his offer were not.

N.H. Market Basket Vendors Pull Out In Support Of Workers

Some New Hampshire food and beverage vendors who supply Market Basket's shelves say they're backing workers by no longer selling products to the beleaguered grocery chain.

The governors of Massachusetts and New Hampshire are stepping up efforts to broker a deal to bring the Market Basket standoff to an end.

The grocery store chain has 71 stores, all but one in Massachusetts and New Hampshire.

A Patrick spokeswoman says the "the parties have made real progress" and are encouraged that a "resolution may be within reach."

The former CEO of the Market Basket supermarket chain who is attempting to regain control of the company from relatives says "onerous" terms are preventing him from buying a controlling share from those family members.

Arthur T. Demoulas said in a statement issued by a spokeswoman Sunday that his offers to buy the company "have been rejected, not on the basis of price, but with counterproposals that have been laden with onerous terms that are far beyond comparable transactions."

Demoulas was fired in June by a board controlled by his rival cousin, Arthur S. Demoulas.

“Highest volume was in the Portsmouth location of that and the second highest was in Salem.”

He expects that number to rise drastically next week, when the company’s part-time employees see their hours cut.

An estimated 8,000 part-time Market Basket employees in New Hampshire may be without a paycheck next week.

The embattled supermarket chain announced Thursday that with sales plummeting from customer boycotts, part-time employees would no longer be scheduled for hours starting Sunday.

Part-time cashier Susan Mawson was standing outside the Londonderry Market Basket, her sign pledging allegiance to Arthur T. Demoulas torn and tattered from weeks of protesting.