Young Muslims have gathered in cities across the U.S. today to answer questions about their faith. Organizers say it's an outreach effort aimed at dispelling fears or inaccurate ideas about Islam in a political climate that has Muslims increasingly worried about their viewed - or rather about how they are viewed. Travis Bubenik takes us to one of these Meet a Muslim events in Houston.

TRAVIS BUBENIK, BYLINE: At a tranquil downtown park, kids are playing on a jungle gym, couples are out for a Saturday walk and a small group of millennials are holding signs reading I am a Muslim, ask me anything.

BILAL RANA: It is a very uncertain time. I think people are very afraid, and certainly times are changing very fast.

BUBENIK: Bilal Rana is head of the Ahmadiyya Muslim Youth Association, a national group of young men and boys. He says discrimination is a part of life for Muslim-Americans. He says he's even had people assume for no reason that he was a terrorist. But Rana says that kind of profiling is on the rise.

RANA: Not only is it occurring more, but I think Muslims are more tender. It's a vulnerable time for Muslims.

RAHMAN NASIR: Overall tensions in the country are increasing.

NASIR: For example, yesterday, I wanted to go to the gym around 8, 9 p.m., and my mom said, no, the tensions are high these days. You know, it's not safe for you to go out late by yourself. I was just going to the gym, but my mom didn't feel comfortable.

BUBENIK: Greg Powell stops by to chat and tell the young men how glad he is they're here. He's a conservative evangelical Christian and a pastor. And while he says he loves Islam, he has friends who don't. He says their fears are based on simple misconceptions.

GREG POWELL: I know something that some - a lot of my friends don't know, and that's that I have actually never met a Muslim who wanted to kill me or anyone else.

BUBENIK: Adding to longstanding concerns about Islamophobia are reports of a recent rise in hate incidents against minorities in the U.S. and the feeling among some Muslims that policies like the Trump administration's travel bans against several Muslim-majority countries are targeting them. But Rana says his group feels engagement, not necessarily protest is the key to empathy.

RANA: Talking to people, breaking bread with them, shaking their hand. That's how you win hearts and minds of people, and you put their anxieties at rest.

BUBENIK: It's hard to tell how far this one event or others like it went in fighting discrimination, but the organizers here at least feel they've taken a step in the right direction by offering people a welcoming environment to learn more about their faith. For NPR News, I'm Travis Bubenik in Houston. Transcript provided by NPR, Copyright NPR. 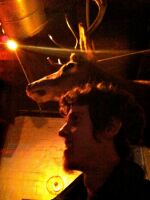 Travis Bubenik
Travis graduated from the University of Texas at Austin, where he spent most of his time working for UT's student-run radio station, KVRX. There he hosted an alternative folk program for over 2 years, served as Traffic Manager, and was eventually appointed Station Manager.
See stories by Travis Bubenik
Latest Stories