Despite A Heads Up, Storm Paralyzes North Carolina

And I'm Renee Montagne. Good morning. The South is digging out from another severe winter storm. Hundreds of thousands of people are without power this morning. Some places in Georgia got a half-foot of snow; almost a foot of snow fell in New Bern, N.C.; and in Raleigh, a sudden burst of snow caught some people off guard, even though meteorologists had warned of the threat for days.

GURNAL SCOTT, BYLINE: Not long after the snow began to fall in North Carolina, crews were trying to clean it up.

SCOTT: This snowplow was in a Raleigh neighborhood, clearing streets. North Carolina's governor, Pat McCrory, had already declared a state of emergency and warned residents to be vigilant.

GOV. PAT MCCRORY: Don't put your stupid hat on at this point in time. Protect yourself, protect your family, protect your neighbors. Let's protect each other during this next 48 hours.

SCOTT: Aside from the loss of power for thousands of residents, one of the biggest concerns were the roads. State Transportation Secretary Tony Tata said they were aggressive treating the streets before and during the snowstorm.

TONY TATA: Two-point-seven million gallons of brine have been used just for this event alone. And about 1,500 tons of salt have been put down in preparation for this event, as well.

SCOTT: But the snow fell so heavily at times in Raleigh, the interstates clogged with cars that had nowhere to go. Just like what happened in Birmingham and Atlanta during a storm two weeks ago, some people abandoned their cars and started walking. Raleigh resident Alex Thweatt traversed the snow to pick up his wife and daughter.

MCCRORY: Others ventured outside last night to a local drugstore for some last-minute supplies, only to find locked doors.

TONY PUGLIESI: I think they are closed. Aw, hell. What the hell they got the lights on for?

SCOTT: Tony Pugliesi isn't so frustrated about the snow. He lives in North Carolina's capital, but his roots are in New Jersey, where he's seen a snowfall or two.

PUGLIESI: This stuff really is not that bad. I mean, it's not that slippery. When the temperature drops and it starts melting, that's when it's going to get bad.

SCOTT: Residents will wake up this morning to snow-covered roads and a layer of ice. State officials are urging people - if they don't have to go out - to spend another day indoors. Colonel William Grey is commander of the North Carolina Highway Patrol. He expects to be busy today.

COL. WILLIAM GREY: We will have all available troopers on the road. We'll be increasing high-density traffic enforcement and visibility as we move forward, looking for the disabled motorist, the stranded motorist and also those who have been involved in collisions.

MCCRORY: Tony Pugliesi, the New Jersey native, chalks up yesterday's gridlock to inexperience. He says there just haven't been many significant snowstorms in Raleigh in the past few years, and that coating of ice didn't help, either.

PUGLIESI: No, you can't drive on ice, even in New Jersey.

SCOTT: Today won't be any better. The forecast is for more snow and freezing rain. 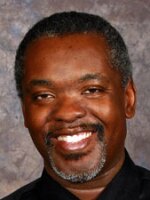 Gurnal Scott
Gurnal Scott joined North Carolina Public Radio in March 2012 after several stops in radio and television. After graduating from the College of Charleston in his South Carolina hometown, he began his career in radio there. He started as a sports reporter at News/Talk Radio WTMA and won five Sportscaster of the Year awards. In 1997, Gurnal moved on to television as general assignment reporter and weekend anchor for WCSC-TV in Charleston. He anchored the market's top-rated weekend newscasts until leaving Charleston for Memphis, TN in 2002. Gurnal worked at WPTY-TV for two years before returning to his roots in radio. He joined the staff of Memphis' NewsRadio 600 WREC in 2004 eventually rising to News Director. In 2006, Raleigh news radio station WPTF came calling and he became the station's chief correspondent. Gurnal’s reporting has been honored by the South Carolina Broadcasters Association, the North Carolina Associated Press, and the Radio Television Digital News Association of the Carolinas.
See stories by Gurnal Scott
Latest Stories