Dolphins have been stranding themselves along the shores of Cape Cod, Mass., since the Pilgrims' times, and this winter is no different. What is different is how long the latest round of strandings has lasted — almost a month. So far, rescuers have counted 147 strandings and 38 successful rescues and releases.

No one knows exactly why these animals come ashore, but when they do teams of rescuers and volunteers mobilize to try to save them. One such team is led by marine biologist Misty Niemeyer down a beach on Cape Cod Bay to where a 6-foot black common dolphin lies on the sand. It's one of four dolphins that were spotted along the beach earlier that morning. The volunteers gently secure the dolphin inside a harness, then hoist it onto a large beach cart with oversized wheels.

Seagulls have pecked at the dolphin's eyes, which are bloodied, but other than that Niemeyer says the dolphins found that morning seem healthy.

"Two of them have some minor injuries but we're gonna just clean them up and take a look at them and we're hoping to release all four of them," she says.

Niemeyer helps the volunteers push the dolphin down the beach toward a waiting truck. She's a scientist with the International Fund for Animal Welfare, which relies on a network of 300 volunteers who alert the group when stranded dolphins are sighted and assist with rescues.

Kit Boucher, a volunteer from nearby Eastham, says she loves working with the animals. "It's an honor to be in their presence," she says, "and it's humbling and also an honor to be with them if you're right there when they die. Beautiful, beautiful creatures."

The dolphins are brought up from the beach, then carefully lifted onto mats inside a specially equipped IFAW trailer.

Scientists are having a hard time explaining the dolphin strandings. Some say Cape Cod's hooked shape traps dolphins that swim into the bay and then can't find their way out. The cape also has numerous creeks and sand flats, as well as 9-foot tide fluctuations.

"These are very social animals," she says. "When they do come into shore for whatever reason, they stick together. And so once that happens, you end up with many animals at the same time."

Moore says you can't just turn the dolphins around and send them back out into the bay because they're likely to re-strand. "So we put them in our trucks, continue our health assessments and supportive care and then release them off the other side of the cape, or off the tip of the cape out in Provincetown, where they have a shot at open water without any sand bars or creeks."

After a couple hours of blood tests and other exams, IFAW scientists decide these four dolphins are healthy enough to release. At around 8:30 p.m., the large IFAW trailer arrives at Herring Cove Beach, the northernmost point of Cape Cod. From there it's a straight run back out to the ocean.

All four dolphins are given a final assessment in the parking lot, weighed and then carted down to the beach, where their harnesses are gently removed in waist-high water. It's a remarkable success, considering that around two-thirds of the recently stranded dolphins have died.

After re-acclimating themselves for a few seconds, the animals quietly slip back into the Atlantic, taking with them the secret to whatever impulses drove them ashore. 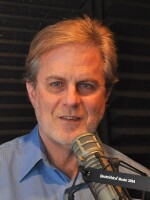 Brian Morris
Brian Morris began working with WCAI in 2005 as an independent reporter/producer, and joined the staff full time in December, 2013. He has contributed to the station's “Creative Life” series, produced the “Nautical Minutes” series of :60 vignettes about nautical life on the Cape and Islands, reported on South Coast issues, and provided field production support for "The Point." He is host of WCAI's All Things Considered.
See stories by Brian Morris
Latest Stories