Federal authorities have arrested a protester for trespassing in front of the U.S District Court in Portland. The arrest followed a 15-hour walking vigil around the courthouse that was intended to bring attention to the United States’ withdrawal from the Paris climate agreement.

Rob Levin knew what he was about to do would land him in jail. But that didn’t stop him from erecting a U.S. flag at half-staff on the premises of the federal courthouse while over a dozen supporters stood in solidarity with him.

He says his act of civil disobedience symbolizes a national tragedy, and the profound disappointment he feels is what led him to do something he has never done — break the law.

“I’ve never considered doing that before in this way and it’s sad to me. I feel more sad than anything, and yet I feel I need act on this and not just sit and feel sad,” he says.

Levin began his protest the previous night around midnight. And for more than 15 hours, he walked in a circle around U.S. District Court, in snow, sleet and freezing rain. He walked the loop 195 times, once for each country that has signed on to Paris climate agreement.

Then, toward the end, Levin and a handful of others walked counterclockwise to symbolize the U.S. going back on the treaty.

Over the course of Levin’s walk, he was joined by different groups of activists. Among the supporters was Liz McGhee.

“And it’s so hard to know what to do just as one person. And I know what we’re doing today may not make a difference, but it feels like something, and hopefully it’s one of way of raising our voice about what’s going on,” she says.

McGhee says she’s particularly concerned about the effect that climate change is having on the Arctic and its wildlife.

“The thing that’s really been breaking my heart is what’s been happening to the polar bears and all the other creatures that are not quite the studs and the poster boys that the polar bears are,” she says.

“We’re standing here today as witnesses to hope, change and peace. And those are all combined. You can’t separate into individual legislative actions,” he says.

Levin estimates he walked about 30 miles during his protest, and now may spend the night in federal custody. 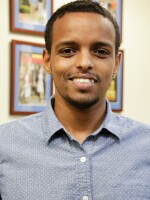 Abukar Adan
Abukar grew up in Portland, Maine, and recently graduated from Colby College. He got his start in radio journalism as a 2016 Jim Dowe Public Media Intern at Maine Public, where he produced a series of stories about Muslims in Maine.
See stories by Abukar Adan
Latest Stories